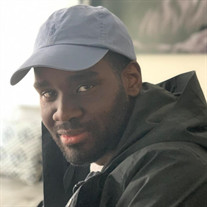 Vob Richie Pierre, better known as Richie Pierre, was born June 22, 1992 in Port-de-Paix, Haiti. On Wednesday, May 26, 2021, Richie Pierre passed away. Richie was educated in the Cobb County School System where he was a 2011 graduate of RL Osborne High School. After graduating high school, Richie attended Kennesaw State University. While in school Richie was enlisted into the Army National Guard in 2012. He later joined the United States Army in 2016. Richie accomplished so much within his service. He defended this country, The United States of America, during the War on Iraq in Afghanistan. He earned the rank of Staff Sergeant, where he served as a brother and leader to many of his peers. Upon his retirement, Richie returned to school with hopes to earn his BA degree in Business Management at North Carolina State University. Over the years, Richie developed interests in all aspects of life. He had a profound love for the outdoors, setting his own increasingly difficult fitness goals, breaking world records, and a competitive drive that forced excellence in all that he desired. He loved books from philosophy, fiction, and history. He loved all people and had a deep love for his family and his friends. Richie is survived by his parents, Manise Pierre and Jean Claude Pierre; his brothers, Lee Roy Pierre, Nick Pierre, Marvin Moise; and his sister, Debbie Pierre. With his life, Richie gifted his family, friends, and the world with cherished lessons, experiences, and memories. His family loves him dearly and would like to express our deepest thanks to all of those who supported, loved, and provided joy to his life and ours. A memorial service will be held Monday, June 7th, 9:30 am at Davis-Struempf Chapel with Pastor Delto Celin officiating. Private family interment services to follow. For anyone wishing to view the service virtually, a livestream link is listed on Richie's page and will begin streaming at the above-listed service time.

Vob Richie Pierre, better known as Richie Pierre, was born June 22, 1992 in Port-de-Paix, Haiti. On Wednesday, May 26, 2021, Richie Pierre passed away. Richie was educated in the Cobb County School System where he was a 2011 graduate of RL... View Obituary & Service Information

The family of Vob Richie Pierre created this Life Tributes page to make it easy to share your memories.

Send flowers to the Pierre family.