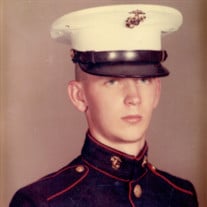 Terrence David Tromza of Austell, GA, passed away peacefully at the Cobb General Hospital in Austell Ga on July 17, 2017. He attended Plum High School in Plum Borough, PA. He joined the Marine Corps and served two tours of duty in the Vietnam war. Upon separation from the Marine Corps at the rank of Sargent, Terry joined the U.S. Army and served one tour of duty in Korea and then served his country before retiring from the military with twenty years of service. Terry then worked as a machinist for his brother, James Tromza, at T&S Metal Finishing in Austell, GA, before retiring at the age of 66. Terry was a proud member of the Veterans of Foreign Wars Post 92. Terry was also a proud member of the Knights of Columbus where he participated in packing food for food banks. He was also an usher at his church, St. John Vianney, Lithia Springs Georgia. In addition to his late father and mother, Terry is predeceased by his brother, John Stephen Tromza. He is survived by his brother, James Robert Tromza of Sparta, GA; and his three sisters Mary Jane Jeter of Canton, Ct; Phyllis Lynn Block of Harrisburg, PA; and Regina Rebecca Raynor of Canton, CT. He is also survived by five nephews: Timothy Tromza of Carrollton, GA; Randy Tromza of Taylorsville, GA; John Tromza of Vernon, CT; William Tromza of East Hampton, CT; and Kevin Tromza of East Hartford, CT; and four nieces: Laurie Tromza Boyer of East Taunton, MA; Michelle Block Gasper of Kingsland, GA; Terri Block Aasen of Surprise, AZ, and Elizabeth Raynor of Canton, CT, as well as several cousins, great nieces and great nephews. The family will receive friends for visitation Thursday from 4:00-8:00 PM at Davis—Struempf Funeral Home with a Rosary Service beginning at 7:00 PM. A Graveside Service will be held Friday 2:30 PM at The Georgia Veterans Memorial Cemetery in Milledgeville, Georgia.

Terrence David Tromza of Austell, GA, passed away peacefully at the Cobb General Hospital in Austell Ga on July 17, 2017. He attended Plum High School in Plum Borough, PA. He joined the Marine Corps and served two tours of duty in the Vietnam... View Obituary & Service Information

The family of Terence David Tromza created this Life Tributes page to make it easy to share your memories.

Send flowers to the Tromza family.