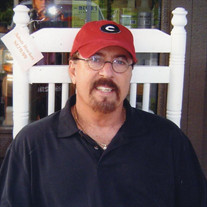 Robert “Bobby” Morrison Hall, Jr., age 74, of Powder Springs passed away March 14, 2020. Robert served his country in the Air Force as a crew chief, and then went on to work for 40 years at CSX, where he was a railroad engineer. Robert’s passions included fishing, being outdoors, and building guns. He adored animals, especially dogs and his favorites, American Bulldogs. Robert was a man that could learn anything that he put his mind to. From becoming a black belt in karate, to getting his commercial and private pilots license…nothing could hold him back from striving for the best. He was the quintessential All-American Man; his word was his bond, and if he told you he was going to do something, he did it to the best of his ability. Robert is survived by his loving wife of 54 years, Linda Barnes Hall; daughters, Robin Hall Akery (husband, Mark L. Akery) of Douglasville and Heather Hall Vasquez (husband, Cesar Vasquez) of Lawrenceville; grandchildren, Robert Nicholas Akery, Ava Leigh Akery, and Cesar Andres Vasquez; and his five beloved dogs, Conan, Ms. Piggy, Cosmo, Sugerbear, and Mickey. Funeral services will be held Tuesday, March 17th, 3:00 PM at Davis-Struempf Chapel with Rev. Bill Rorie officiating. Interment will follow the service at Sweetwater Memorial Park. The family will receive friends on Monday from 4:00 to 8:00 PM at the funeral home. Flowers are accepted, however, in lieu of flowers, the family requests memorials be made to the Leukemia and Lymphoma Society at https://www.lls.org/.

The family of Robert "Bobby" Morrison Hall Jr. created this Life Tributes page to make it easy to share your memories.

Send flowers to the Hall family.