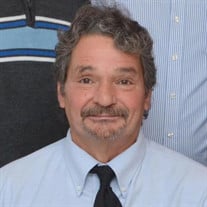 Michael “Mickey” David Wright, age 68, of Winston passed away surrounded by his family on December 19, 2021. Mickey was born in Atlanta to Robert and Anna Mae Wright, and spent a majority of his childhood in Cobb County. He attended and graduated from Osborne High School, where he met the love of his life, Cathy. After high school, he and Cathy married in 1972. Mickey went into the electrical field and became an adept commercial electrician. He worked on large projects in the Marietta and Atlanta area and put forth his best effort in all his endeavors. He was also a wonderful leader and encouraged his crew to have the same pride that he had in their work. In true Renaissance fashion, Mickey was a talented oil painter, musician, and creator. He loved working with his hands, and if something was broken, he could fix it. Mickey was an avid nature lover and especially enjoyed camping and spending time out on the water. He went out of his way to help others and never met a stranger. Young at heart, Mickey’s jokes, joy, and laughter will be greatly missed by his family and friends. Mickey is preceded in death by his parents, Robert Gordon Wright and Anna Mae Winkelspecht Wright; and daughter, Cynthia Rae Wright. He is survived by his beloved wife of 49 years, Catherine Spencer Wright; children, Michael John Wright and Matthew David Wright, both of Winston, and Katie Sluder (husband, David) of Marietta; siblings, Richard Wright (wife, Rosemary) of Fayetteville, William “Skip” Wright (wife, Debbie) of Winston, and Vicki McIntosh (husband, Tim) of Dalton; and many beloved nieces and nephews. A graveside service will be held Thursday, December 23, 2:30 PM at Cheatham Hill Memorial Park with Preacher Tim McIntosh officiating. In lieu of flowers, memorials in Mickey’s name may be made to the National Park Foundation at https://www.nationalparks.org/ or the American Cancer Society at https://www.cancer.org/

Michael &#8220;Mickey&#8221; David Wright, age 68, of Winston passed away surrounded by his family on December 19, 2021. Mickey was born in Atlanta to Robert and Anna Mae Wright, and spent a majority of his childhood in Cobb County. He attended... View Obituary & Service Information

The family of Michael "Mickey" David Wright created this Life Tributes page to make it easy to share your memories.

Send flowers to the Wright family.