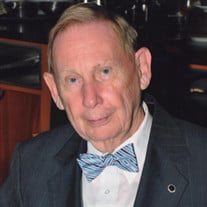 John Lowry Johnston Marietta, GA June 20, 1931 – September 23, 2020 John Lowry Johnston, 89, beloved husband, father, father-in-law, grandfather, uncle, cousin, and friend, entered the presence of his Lord and Savior Jesus Christ on September 23, 2020. He was preceded in death by his wife of 58 years, Phyllis Jean Coleman; his parents, Marvin and Mabel Johnston; his sister, Eloise Virginia Johnston; and brother, Harold Monroe Johnston. He is survived by his daughter, Rebecca Ann and her husband, Loren Paul Rees; his son, Jeffrey Monroe Johnston and his wife Lisa Martin; three grandchildren: Christopher and wife, Rachel Rees; Matthew and wife, Laura Rees, soon to become parents of John’s first great-grandchild; and Elijah Bleu Johnston; cousins Russell, Edna, and Otis Johnston and Lucille Yankee; two of his nieces and spouses, Patty Johnston and Larry Frail, and Jane Johnston and Dick Showalter; the Coleman nieces and nephews; as well as his many beloved friends, including those from First Alliance Church and the group of Lockheed retirees who met for breakfast many years at The Marietta Diner. John was a caring, giving man who lived a remarkable life. He led by example and his influence will remain for generations to come. He was proud to take the helm as patriarch of the family and his family was the most important aspect of his life. John was always young at heart and never met a stranger. He was a man of strong character who was well respected in his business and personal life. He will be discernibly missed by all who knew him. John was born June 20, 1931, in Huntington, WV. He graduated from East Huntington High as class Salutatorian, being chosen in his senior year as Mayor-for-a-Day of Huntington. He next graduated Cum Laude from his beloved Marshall University in 1953, then joined the Navy, spending five years active duty, and then at the Naval Air Station in Atlanta, GA. John remained 15 years in the Reserves and retired in 1975 as a Lieutenant Commander. John enjoyed a challenging, rewarding career at Lockheed-GA Corporation, where he worked for 41 years. He was responsible for the Materiel portion of the proposal to the U.S. Air Force for the C-5 Galaxy military transport aircraft, which at the time would become the world's largest airplane. He was promoted to Materiel Program Manager and remained associated with the C-5 Program for 34 years, with his final job advancing to Director of Program Management. In June 1954 he married Phyllis Jean Coleman in Huntington, WV. Though they shared many joyous times, Phyllis had multiple debilitating surgeries and John was a devoted caregiver to her. His commitment to her was unwavering and they enjoyed retirement at The Misty J lakehouse. They both had a vital church life, and imparted their faith in God to their family. John’s family benefited greatly from his generous commitment to their success and well-being, including spending much time together. To that end, they were able to enjoy numerous vacations with him, including ten Alaskan, Caribbean and European cruises he fully paid for. For the last 3 years John enjoyed his new “family” at the Sterling Estates retirement community in West Cobb where he was lovingly referred to as the “Ambassador” of the facility. The Johnston family wishes to thank the staff and residents of the Sterling for their friendship, love, and care for him throughout his stay there. He took great pride in his new home and enjoyed the relationships he developed. In lieu of flowers the family requests memorial donations be made to Paradise Mountain Ministries Toccoa, GA. www.paradisemtn.org or to Marshall University, Huntington, WV. Those wishing to sign John’s guest book can do so at www.davisstruempf.com/obituaries The interment will be held Saturday, September 26, 2020 at 12:00 pm at Arlington Memorial Park Cemetery, 201 Mount Vernon Hwy NW, Sandy Springs, GA. Dad and Grandpa, you will be greatly missed and forever loved: For I am sure that neither death nor life, nor angels nor rulers, nor things present nor things to come, nor powers, nor height nor depth, nor anything else in all creation, will be able to separate us from the love of God in Christ Jesus our Lord. Roman 8:38-39 Written by the family. Funeral services provided by Davis-Struempf Funeral Home & Crematory, Austell, GA For those wishing to view the service virtually, Mr. Johnston's funeral service will be livestreamed at the above listed time on Davis-Struempf Funeral Home's Facebook page. In keeping with current precautions due to COVID-19, we are requesting that anyone visiting wear a mask and maintain social distancing.

The family of John Lowry Johnston created this Life Tributes page to make it easy to share your memories.

Send flowers to the Johnston family.