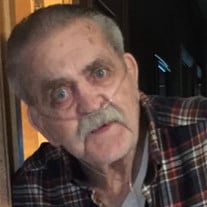 Homer Marvin Olvey, Sr, age 89, of Powder Springs passed away January 22, 2021. Marvin was born in Atlanta to Homer Glenn and Daisy Mae Olvey. He grew up in the Simsville area and attended West Fulton High School. In 1952, he married the love of his life, Gracie Mae Neal, and they were together until her death in 2004. Growing up, Marvin and his brother, Glenn, were known in the Atlanta area as the “Olvey Boys”. Both of them were quite strong and very proud of their physical capabilities! Marvin once picked up the back end of a truck on a bet and he loved to arm wrestle. Marvin was even approached to wrestle professionally, but turned them down. Marvin was a member of the Teamsters Union and retired from working in the freight industry about 40 years ago. In his retirement, he loved to play scratch-offs and visit the dog track. He was a serious soul who could frequently be heard saying “lordy, lordy, lordy…”. He was immensely dedicated to his parents while they were alive and to his dear sister, Margaret. Marvin was a beloved husband, father, brother, son, and grandfather, and while he will be dearly missed, his family rejoices that he is now in a new body that is without pain. Marvin was preceded in death by his parents, Homer Glenn and Daisy Mae Olvey, wife, Gracie Mae Olvey; son, Joe Olvey; sister, Margaret Cox; and brother, Glenn Olvey. He is survived by his children, Pam (Barry) Brooks of Austell, and Marvin (Angie) Olvey, Jr. of Powder Springs; grandchildren, Greg (Brandy), Keith (Jennifer), Lori (Michael), Dana (Austin), and Breanne; several great-grandchildren; and a host of beloved extended family. Funeral services will be held Tuesday, January 26th, 2:00 PM at Davis-Struempf Chapel with Rev. Bill Rorie officiating. Interment will follow the service at Crest Lawn Memorial Park. The family will receive friends from 12:00 to 2:00 PM before the service. In keeping with current precautions due to COVID-19, we are requesting that anyone visiting wear a mask and maintain social distancing. For anyone wishing to view the service virtually, a livestream video will appear under the "Tribute Wall" on Mr. Olvey's Tribute page at the above listed service time.

Homer Marvin Olvey, Sr, age 89, of Powder Springs passed away January 22, 2021. Marvin was born in Atlanta to Homer Glenn and Daisy Mae Olvey. He grew up in the Simsville area and attended West Fulton High School. In 1952, he married the love... View Obituary & Service Information

The family of Homer Marvin Olvey Sr created this Life Tributes page to make it easy to share your memories.

Send flowers to the Olvey family.