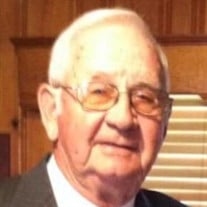 Rev. David Douglas “Doug” Chamlee went to be with his Heavenly Father on Tuesday, October 12, 2021, at the age of 87. Doug was born September 21, 1934 to Carl and Dola Spencer Chamlee. He married his sweetheart, Betty Tankersley, on June 29th, 1956. They celebrated 65 years together this year. He proudly served his country in the Navy during the Korean Conflict from 1951 to 1955. After that, he enjoyed a career in HVAC until the Lord called him into the ministry in the early 1970’s. He, along with Betty, pastored numerous churches through the years until his retirement. Doug’s passions were Christ, his family, softball, and Georgia Tech football. He was preceded in death by his parents; brothers, Donald, Billy, and Richard; sisters, Dorothy and Nancy; son, Michael Daniel; and great-granddaughter, Charlotte. Doug is survived by his loving wife, Betty Jean Chamlee; son, Mark (wife, Kim) Chamlee; daughters, Sharon Morrison, Gaye Chamlee, and Kelly (husband, Earl) Pace; eleven grandchildren; nineteen great-grandchildren; brother, Wayne (wife, Ruth) Chamlee; and many beloved nieces and nephews. Funeral services will be held Friday, October 15th, 1:00 PM at Davis-Struempf Chapel with Terry Tankersley officiating. Interment will follow the service at Crest Lawn Memorial Park. The family will receive friends from 11:00 to 1:00 PM before the service. For anyone wishing to view the service virtually, a livestream will occur at the above-listed service time and can be viewed on Doug's Tribute Page at www.davisstruempf.com.

The family of Rev. David "Doug" Douglas Chamlee created this Life Tributes page to make it easy to share your memories.

Rev. David Douglas “Doug” Chamlee went to be with his Heavenly...

Send flowers to the Chamlee family.