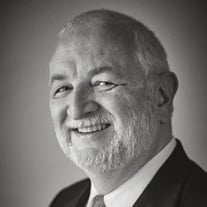 David Kenneth Booth passed away peacefully December 13, 2021 at his home after valiantly battling cancer for four and a half years. As he told his oncologist shortly before entering hospice care, for him to live was Christ and to die was gain. A gain for David, to be sure, as he is now with the Savior he followed so faithfully and loved so deeply, but a distinct loss to the family and friends who keenly feel his absence. Described by a friend as ‘such a kind and gentle soul with a dusting of humor and smiles’, David loved well and was loved well in return by so many. Born to Francis Kenneth (Frank) and Elizabeth Louise Roberts Booth on February 13, 1952, in Oak Ridge, Tennessee, David grew up with his sister Dianne (David) Sontag and a bevy of aunts & uncles & cousins whom he considered among his closest friends. He loved being an uncle to Dianne’s children, Katie & Andy, too. He married Linda Marie King in May 1972, and he told their daughter in the last few days of his life that he and Linda were still lovebirds. And they were; in fact, they were often seen still holding hands after 49 and a half years of marriage. They loved being together, no matter what they were doing – whether worshipping Jesus, walking in their neighborhood, or driving around to look at pretty trees and Christmas lights. David was the best dad to his children - Carrie (Eric) Schmidt and Joshua (Bethany) Booth – and was so proud of them and the lives they’ve chosen. He was also the best father-in-law to their respective spouses and loved them as his own children. He always had time for them, along with a ready hug, a word of wisdom, the exact tool needed, and probably a dad joke or ten. He gleefully accepted the role of Poppy to Josh’s two sons, Benji and Bear, and delighted in pool noodle battles, being the tickle monster, getting hugs & kisses, making the boys laugh, playing Candy Land, and dressing up as Santa Claus. Since deciding to follow Jesus in college, David was passionate about discipleship, prayer, and investing in the next generation. He served as an auxiliary probation officer, a deacon, and a teacher as God moved him and Linda from Kingsport, Tennessee to Rockford, Illinois, and then Lexington, Kentucky. He taught one particular group of young men on Sunday mornings from middle school to high school graduation; he remarked often in the last few years how proud he was of them & how faithfully they have continued to love Jesus and serve Him around the world. After his multiple myeloma diagnosis, David and Linda relocated once more, this time to the Atlanta metro area. His daughter and son-in-law soon followed. David was a member of West Ridge Church in Dallas, Georgia, where he also enjoyed being part of a small group. He loved being an active part of his grandsons’ lives and being in closer proximity to his son and daughter-in-law who have lived in Atlanta for many years. Spending time with family was one of David’s favorite things, and he was very happy that he could live close to both of his children. A celebration of David’s life will be held in the chapel of Trinity Anglican Church Westside (2260 Defoor Hills Rd NW / Atlanta, GA 30318) at 11am on December 18, 2021 with a visitation preceding the service at 10am. In lieu of flowers, the family suggests donations be made to St. Jude Children’s Research Hospital (stjude.org). The service will be officiated by Matt Page, a pastor and Navy Chaplain … and one of those young men that David taught on Sunday mornings.

David Kenneth Booth passed away peacefully December 13, 2021 at his home after valiantly battling cancer for four and a half years. As he told his oncologist shortly before entering hospice care, for him to live was Christ and to die was gain.... View Obituary & Service Information

The family of David Kenneth Booth created this Life Tributes page to make it easy to share your memories.

Send flowers to the Booth family.