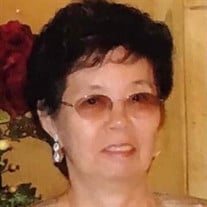 Early Saturday morning, December 11, 2021, Yasuko Gibson, was called from our midst after an extended illness. We will cherish her dearly and miss her forever. Our consolation lies in our knowledge that she has gone on to a land far better than this, where there is no suffering, pain, or tears. Yasuko was born June 18, 1933 in Manchoukuo, Japan to Iwazo and Muneko Machiguchi Iwamoto. On August 4, 1954, at the age of 21, Yasuko married Benjamin Joseph Gibson, and their union was blessed with three children. Yasuko received her first certificate of naturalization and became a citizen of the United States in February of 1985. She lived and raised her family in Queens, New York, where she worked for and retired from the New York City school system. In November of 2005, she moved with her daughter, son-in-law, and grandsons to Austell, Georgia where she loved to shop and garden, residing there until her passing. Yasuko, who was lovingly called Obachan (Baba) by her grands, was quick-witted and high spirited. She took great pride in caring for and cooking for her family and extended family. Though Yasuko became American, she cherished her Japanese culture- enjoying Japanese television programs, Japanese foods, and keeping in touch with her Japanese friends, Ms. Dottie and Ms. Yoko. Obachan (Baba) leaves to mourn her passing her daughter, Rosanna Jones (Gregory); her brothers, Richard Gibson (Anna) and Michael Gibson, Sr. (Felicite); grandchildren, Twaniqua (Brian), Cory, Gregory Jr. (Natasha), Richard, Ceante, Michael A., Mimi, Brandon, Michael Jr., and Miranda; great-grandchildren, Tanique, Tyler, Shaniya, Chloe, Cameron, Eashoa, Lukas, and Jayden; her "Good Nurse", Bernice (Jerry); honorary granddaughter, Debbie (Eric); and honorary great-granddaughter, Kennedy. One grandson preceded her in death, Jerry, and a host of family and friends. Funeral services will be held on Sunday, December 19th, 11:00 AM at Davis-Struempf Chapel with Minister Odetta Porter officiating. The family will receive friends on Saturday from 5:00 to 9:00 PM at the funeral home. In lieu of flowers, please make a donation to the Parkinson's foundation at www.apdaparkinson.org. For those who are unable to attend the service or visitation in person, you may view the visitation and service via livestream by visiting the tribute page.

Early Saturday morning, December 11, 2021, Yasuko Gibson, was called from our midst after an extended illness. We will cherish her dearly and miss her forever. Our consolation lies in our knowledge that she has gone on to a land far better than... View Obituary & Service Information

The family of Yasuko Gibson created this Life Tributes page to make it easy to share your memories.