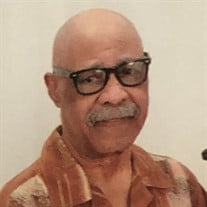 BOOGIE is Gone! William Victor “Boogie” Anders was born to Glen Anders and June Lawson on May 14, 1940 in Omaha, NE. He stopped making his trip around the sun on May 28, 2020. He was 80 years old. He went by Victor, but often signed his name as “Wm. Victor Anders”. He was given his nickname “Boogie”, by his fraternal grandmother, Estella Anders, not for what most assume as being a great dancer but because if he didn’t get his way, she would say, “he would put up fit like a Boogie.” At a young age, he proudly took care of his younger siblings, Terry and Michael. However, due to being so young and some unforeseen circumstances, he and his brothers were raised at the Omaha Home for Boys. While there he accepted Christ as his Lord and Savior and was baptized in 1953. Victor, a 1958 graduate of Omaha Technical High School, was voted Most Talented & Most Musical. His melodic deep bass singing voice was prominently featured in the church choir, school chorus, and his own singing quartet. Upon graduating from Southern University with a degree in Business Management in 1971, he embarked on very successful corporate management career. Beginning in Sales with the Gallo Wine Co, he was promoted to District Manager of Los Angeles after three months. He left there in 1974 for an advancement opportunity as Market Manager in Southern California with the Olympia Brewing Co. On August 12, 1968, he married the love of his life, Marion Henderson. Together they had two lovely children, Tiffany and Damon. Relocating to Atlanta in 1982, he joined Ferrell Gas Propane as a Major Market Manager. In 1989, he took over operations of Glogas Propane as General Manager and retired in 2002. He took on substitute teaching for DeKalb County Middle Schools for two years. Then, at full retirement, he spent time honing in on his golf game and hunting for golf balls on a regular basis. He lived a very exciting and colorful life filled with constant travel to major U.S. cities and took over a dozen cruises. In 1979, he was sent to Germany as part of a team selected to find an Import to be an addition to the Olympia Beer line. While there, he visited the Dachau Concentration Camp in Munich. He said it was the worst experience he ever had as a traveler. Visions of the horrors that took place there brought tears to his eyes. As a two-time cancer survivor, he lost his right lung in 1995, and his prostate in 2002. He was also proud of meeting many famous celebrities such as Joe Louis, Muhammad Ali, President Carter, Gale Sayers, O.J. Simpson, Marlin Briscoe, Al Cowlings, and Smokey Robinson. A Facebook live visitation will be held Thursday, June 4th, from 5:00 to 7:00 PM. The livestream will be viewable on Davis-Struempf Funeral Home’s Facebook page. After cremation, his ashes will spread over the Pacific Ocean at a private ceremony. His father, mother and beloved grandmother preceded William in death. He is survived by his dedicated wife, Dr. Marion Anders of 51years; daughters Danette Hogan (the late Steve) of Omaha, NE, Dr. Tiffany Brown (Michael) of Mableton, GA; sons, Pastor Damon Bridges-Anders (Pastor Barbara) of Stockton, CA; Damon Victor Anders of Kennesaw, GA; brothers, Terry Anders of San Francisco, CA and Michael Anders (Alice) St. Louis. MO; grandchildren, Steven, II of Omaha, NE, Sierra of Charlotte, NC, Jordan, Jalen, and Madison of Mableton, GA. For questions and assistance with the live stream, please feel free to call 770-944-2900. For those wishing to leave the family of Mr. Anders a "Message of Comfort", please email [email protected] with your name and message, and it will be given to the family. More info here: https://bit.ly/3cr1a11.

The family of Wm. Victor Anders created this Life Tributes page to make it easy to share your memories.

Send flowers to the Anders family.