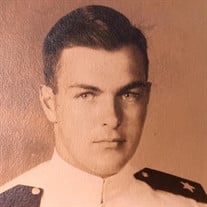 Bill Ayton, a member of the greatest generation, passed away peacefully on Sunday, November 14. He came into this world on February 5, 1924 in New York City, the son of Irish immigrants, William Sr. and Eliza Ayton. Bill was born in Brooklyn, New York. He grew up in Hackensack, New Jersey. After graduating from high school, Bill worked for Standard Oil in New York City. Shortly afterwards, as World War ll was in full swing, he joined the US Navy and was trained to become a pilot where he flew torpedo bombers from Aircraft Carriers in the South Pacific. After the war was over, Bill attended and graduated from Colgate University with a degree in Geology. He also continued flying with the Naval Reserves for 20 more years. His first non-military job was with Standard Oil in Durango, Colorado searching for oil in the fields around there. In 1959, he left Standard Oil and started a new career in Washington D.C. with the Federal Aviation Administration as a Safety Inspector and Accident Investigator for over 30 years. Always wanting to serve others, Bill became very active in his community in Georgia, as a Shriner with the Legion of Honor, volunteer Deputy Sheriff in Gwinnett County and additionally, volunteered driving the parking lot golf cart for many years, rain or shine, at Saint Joseph’s Hospital. He was also an active member of the Dunwoody United Methodist Church for over 45 years. Bill was a devoted Husband, Parent, Grandparent and Great-grandparent, enjoying and attending as many of their activities as he could. Being a long time Atlanta Braves fan, Bill knew he could rest in peace after the Braves recently won the World Series. Bill was preceded in death by his beloved wife, Jane. He is survived by daughter Melinda (husband Buddy), son James (wife Beatrice), grandchildren Erin, Worth, James Jr. and David; great grandchildren, Cale, Kamryn, Sophie, Henry, Brooks and Stevie. Memorial service will be on December 4, 2021 at 11 AM at the Dunwoody United Methodist Church in Dunwoody Georgia. For anyone wishing to view the service online, Mr. Ayton's service will be live-streamed on www.dunwoodyumc.org at the above-listed service time.

Bill Ayton, a member of the greatest generation, passed away peacefully on Sunday, November 14. He came into this world on February 5, 1924 in New York City, the son of Irish immigrants, William Sr. and Eliza Ayton. Bill was born in Brooklyn,... View Obituary & Service Information

The family of William John Ayton Jr. created this Life Tributes page to make it easy to share your memories.

Bill Ayton, a member of the greatest generation, passed away...

Send flowers to the Ayton family.