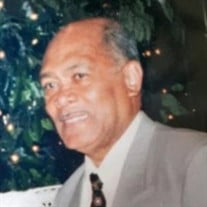 Vernon Gibson passed away on Monday, September 13, 2021 at the age of 88. Vernon was born in Trinidad, West Indies on January 4, 1933. At an early age, Vernon discovered his love for the sea and a thirst for adventure. Consequently, he became an enthusiastic traveler and sailed around the world in his professional career. Vernon had such a passion to explore the world that he actually thought about building a raft but soon realized that might not be a good idea. At the age of 26, Vernon boarded a ship headed to the U.S., and never regretted his decision to leave the West Indies or join the Merchant Marines. He served in the Merchant Marines for 33 years, from1964 to 1997. Vernon started out as a cook/baker and worked his way up to Chief Steward. In the early 70’s Vernon’s job even took him aboard the “States Marine Line” vessel that made 5 trips to Vietnam to deliver ammunition. Vernon left no seaport unexplored, and from his travels, he brought back many gifts for family and friends. These gifts included dolls from China, Japan, jade earrings, clogs from Holland, sarees from India, exotic perfumes, and numerous handcrafted sculptures. Vernon always returned home with exquisite gifts for all. If you knew Vernon, then you know he had the gift of “gab” and took delight in sharing stories of his adventures with anyone who would listen. He had a great sense of humor, was fond of western movies, and loved music. Sunday mornings at the Gibson’s residence were filled with music from Dinah Washington, Sara Vaugh, Billie Holliday, Dionne Warwick, Paul Robeson, Barry White, Whitney Houston, and many more. His all-time favorite athlete was Muhammad Ali, and he watched every boxing match Ali ever fought. Later in life, Vernon discovered LeBron James and never wavered in his loyalty as a fan. In addition, Vernon was a lover of history and politics. He would debate anyone, and never backed down from his opinion or belief. Vernon admired activists such as Nelson Mandela, Malcolm X, Stokely Carmichael, and Huey Newton, while at the same time following the teachings of Mahatma Gandhi. Vernon truly believed in God and feared not getting into heaven. Every morning around 5 a.m. Vernon would sit at the dining room table and say his prayers. He would encourage his family and friends to always pray and read the 91st psalm daily. Vernon leaves behind his loving wife Iva of 47 years, his children: Vernon Jr and Nigel, his stepchildren: Quentin and Chris, his grandchildren: Jason, Gabriella, Aden, Yanick, Clinton, and Sophia, great-grandchild: James, daughter-in-law: Khadi, adopted daughter: Anita Williams, adopted son: Frank, adopted grandchildren: Día, Esunge, and Prisco, sisters: Bianca, Margaret, and Antionette, brothers: Lawford, Anthony, and Keith, as well as numerous cousins, nieces, and nephews. If Vernon Gibson was here today, he would say to us all "Rise and shine and tell the world you're feeling fine". And as he sailed off into eternity, he more than likely said " I'm terrific" one last time. Funeral Services will be held Friday September 24, 2021 10:00 AM at St. Thomas the Apostle Catholic Church with Father Brian officiating.

Vernon Gibson passed away on Monday, September 13, 2021 at the age of 88. Vernon was born in Trinidad, West Indies on January 4, 1933. At an early age, Vernon discovered his love for the sea and a thirst for adventure. Consequently, he became... View Obituary & Service Information

The family of Vernon Gibson created this Life Tributes page to make it easy to share your memories.

Send flowers to the Gibson family.