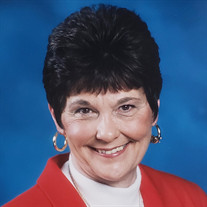 Sally Scott Phillips, of Kennesaw, Georgia, born into this world on September 6, 1938 passed peacefully in her sleep on October 10, 2019. Sally left a legacy of children, grandchildren and great grandchildren and her beloved husband of almost 65 years that are mourning her sweet spirit. Sally was born in Berea, Ohio to Lucille and Clyde Scott. She had no siblings. She attended Northfield High School until 1954 when she married the love of her life, M. Richard (Dick) Phillips. Sally was a lifelong member of the Ohio Order of the Eastern Star, serving as Worthy Matron in 1968. She was a Cub Scout Den Mother to her sons’ troops and always found fun projects for the boys to undertake. After moving from Ohio to Florida, then to Georgia, and then back to Florida, Sally and Dick returned to Georgia and made their permanent home in the Atlanta area in 1983. She and Dick took a leap of faith in the business world when they started both Phoenix Crane Rental and Dixie Erectors in Mableton, GA in 1983 and 1988, respectively. As the businesses grew, they became known as businesses with integrity because that was who Sally was as a person. She was one of the only women that operated a steel erection company. She served as President of Dixie Erectors until she retired due to health reasons in 2005. For over 20 years, Sally was the “Mama Bear” to all her employees; providing advice, comfort, financial assistance, and a swift kick in the behind when warranted. She was highly respected and very much loved by all of her employees and friends. To everyone, she was simply “Miss Sally”. An avid traveler, Sally and Dick travelled the world together whenever their busy lives allowed. They visited Canada, Mexico, England, Scotland, Germany, France and Italy just to name a few. As young parents they always went camping with family and friends. There are a lifetime of stories to tell about all of those adventures. In 1999, just before Sally was diagnosed with cancer, she and Dick took all of their children and grandchildren on a scenic and adventure-filled barge trip on the Marne-Rhine Canal in France. Some of the family’s favorite photos were taken on this trip, and stories abound from that trip. There were also many, many motorcycle, and motor coach, trips taken through the years – always with either friends or family enjoying the sights with Sally and Dick. Sally’s beautiful smile and friendly demeaner will be sorely missed. She had class and style, and loved to laugh and have a good time. She was preceded in death by her middle son, Rick, in 2007 at his age of 45. She leaves behind her husband of almost 65 years and their four surviving children: Sherry Phillips (Les Faust) of Pagosa Springs, CO; Michael (Boyce) Phillips of Marietta, GA; Karen (Chuck) Barton of Kennesaw, GA: and Scott (April) Phillips of Dallas, GA. Grandchildren: Hannah (Tony) Dichiara of Dallas, GA;, Heather (Daniel) Trendafilov of Marietta, GA; Matt Phillips of Brevard, NC; Onilee (Zach) Hembree of Snellville, GA; Tate Phillips, of Athens, GA; Tristan Barton of Kennesaw, GA; Daniel (Amanda) Hobbs of Maysville, GA; and great-grandchildren: Owen, Evan, and Ali Cate Dichiara; Alexis, Lily, Luke and Scott Hembree; and Mason Hobbs. Funeral arrangements are being handled by Davis-Struempf Funeral Home of Marietta, GA. There will be a short visitation starting at 11 am, followed by a Memorial Service at noon on Sunday October 13.

Sally Scott Phillips, of Kennesaw, Georgia, born into this world on September 6, 1938 passed peacefully in her sleep on October 10, 2019. Sally left a legacy of children, grandchildren and great grandchildren and her beloved husband of almost... View Obituary & Service Information

The family of Sally Phillips created this Life Tributes page to make it easy to share your memories.

Sally Scott Phillips, of Kennesaw, Georgia, born into this world...

Send flowers to the Phillips family.