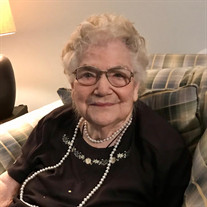 Rosemary Helen Jenner, age 96, of Marietta passed away January 26, 2021. Rosemary Helen Reynolds was born 6/27/1924 in Blackheath, London England. She was the third child of Sarah and Alexander Reynolds. She had a sister, Gwyneth, who was three years older. Rosemary and her sister grew up in the countryside of Kent, a beautiful rural part of England. Their mother was a teacher and later became headmistress of the local school. She witnessed many historical events related to World War II as she lived eleven miles from the English coast and saw and heard activities tied to Dunkirk and the D-Day invasion. She married Victor Ernest Jenner in February 1944, and her first and only child, Vivien, was born on November, 1945. In 1957, Rosemary her husband and child, emigrated to the United States and settled in Marietta, GA. Her husband was a tool and die maker and had been recruited by Lockheed to work for them. He would later pass away in June 1966. After interviewing for several positions, Rosemary was employed by Rich’s in the lingerie department as a fitter, retiring after 34 years of service. Even in her elder years, ladies would come up to her remembering her for helping them, their daughters and their granddaughters. She loved the Lord, being very devout Christian, and lived her faith every day looking forward to the day she would go on to Glory. She dearly loved her grandchildren, great-grandchildren, and step great-grandchildren as they were added to her family. She was known as mom, mammo to her grandchildren and great grandchildren, Ms. Rosemary to her son in law and other family, Mrs. Doubtfire lady to her grandchildren’s friends. Rosemary was preceded in death by her parents, Alexander and Sarah Reynolds; husband, Victor Ernest Jenner; and sister, Gwyneth Mercer. She is survived by her daughter, Vivien (Brian) Sanders of Austell; grandchildren, Edward (Diana) Hunnicutt, Karin (Tony Croft) Yates, Sonya (Josh) Chandler, Christy (Glenn) Holter, and Bradley (Tammy) Sanders; great-grandchildren, Madison, Hailey, Michael, Karson, Brianna, Jessi, Shayla, Madeline, Hunter, Tyler, Caleb, Havanna, and Joseph; and beloved nieces, nephew, and extended family. A memorial service honoring Rosemary’s life will be held Saturday, January 30th, 2:00 PM at Davis-Struempf Chapel with Dr. Randal Whitten officiating. The family will receive friends from 1:00 to 2:00 PM before the service. Anyone wishing to view the service virtually may do so via a livestream video that will appear on Mrs. Jenner’s page during the listed service time. In keeping with current precautions due to COVID-19, we are requesting that anyone visiting wear a mask and maintain social distancing.

Rosemary Helen Jenner, age 96, of Marietta passed away January 26, 2021. Rosemary Helen Reynolds was born 6/27/1924 in Blackheath, London England. She was the third child of Sarah and Alexander Reynolds. She had a sister, Gwyneth, who was three... View Obituary & Service Information

The family of Rosemary Helen Jenner created this Life Tributes page to make it easy to share your memories.

Send flowers to the Jenner family.