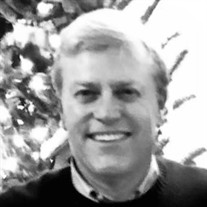 Robert Hollis Tharpe, III, 56, of Marietta, GA died November 28th, 2020. He was born in 1964 in Atlanta, GA to parents Robert Hollis Tharpe, Jr. and Madge Smith McCown. After graduating from Lovett High School, he completed an undergraduate degree in Journalism at The University of Georgia. He went on to complete a Masters in Construction Management at Colorado State University. In 1989, he began his lifetime career in construction management. He became a licensed general contractor, and, in later years, focused on developing student and multi-use housing. His greatest joys were spending time with his family, enjoying nature at his cabin and houseboat, as well as hiking, boating, and playing dice. He was preceded in death by his father, Robert Hollis Tharpe, Jr. and his stepfather, George Richard McCown as well as his paternal grandparents, Robert Hollis Tharpe and Kathryne B. Tharpe, and maternal grandparents, George B. Smith and Gertrude E. Smith. He is survived by his wife, Teri Ann Tharpe, his daughters Roni Carter, Cassidy Smith, and Brittany Coats, and his son Robert (Bobby) Hollis Tharpe IV; two grandchildren; his mother, Madge Smith McCown, his sisters Patti Ledbetter and Kathy Siegel; his stepmother Linda Tharpe, and his stepbrothers Paul McCown and Steele McCown. Family and friends gathered at Grace Marietta Church and the Tharpe Home in celebration of Rob’s life. All memorial donations should be made to The Joy House or Waypoint Ministry. These restorative organizations were close to his heart. Thejoyhouse.org and Waypointministry.com

The family of Robert Hollis Tharpe III created this Life Tributes page to make it easy to share your memories.

Send flowers to the Tharpe family.