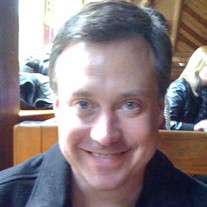 Robert Walton Sudlow, Jr., of Atlanta, passed away on July 13, 2019. Robert was born January 28, 1971 to Connie Veal Sudlow and the late Robert Walton Sudlow. He grew up in Atlanta and attended Riverwood High School, Emory University and Georgia State School of Law. Rob and his wife Amy enjoyed traveling and spending time with their four sons. Rob was a kind and loving man who loved learning. He was an avid reader. Rob was predeceased by his father, Robert Sudlow. Rob is survived by his loving wife and best friend, Amy Smith Sudlow, Thomas Sudlow, Henry Sudlow, Carson Blackford, Taylor Blackford and Libby Sudlow, mother of Thomas and Henry Sudlow. Rob’s mother Connie Sudlow, brother Mark Sudlow and his wife Katy, their children Maddy Sudlow and Byrnes Sudlow. Rob had many aunts, uncles, cousins and friends and other family members who loved him dearly and will miss him always. The family wants to thank the staff at Emory Hospital for their care and support and for all of the continued prayers from his family and friends. A memorial service will be held 1:00 PM on Thursday, July 18, 2019 at St. James United Methodists Church with a reception to follow. In lieu of flowers, memorial contributions may be made to the National Institute of Alcohol Abuse and Alcoholism Financial Management Branch-Gift Fund, 6700-B Rockledge Dr. Room 1336, Bethesda, Maryland 20892-6902 or Saint James United Methodist Church 4400 Peachtree Dunwoody Road, Atlanta, GA 30342. Arrangements are with Davis-Struempf Funeral Home & Crematory, Austell.www.davisstruempf.com

The family of Robert Walton Sudlow Jr. created this Life Tributes page to make it easy to share your memories.

Send flowers to the Sudlow family.