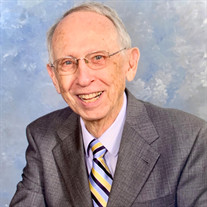 On Sunday, October 13, 2019, Robert (Bob) Alexander Williams Jr. went home to be with the Lord at the age of 84 in Charlotte, North Carolina. Bob was preceded in death by his parents Robert Alexander Williams Sr. and Mary Swift Williams, his sister, Merry Nita Still. He was also preceded in death by his wife, Olivia Burrell Williams and his son, Robby Williams III. He is survived by his daughter, Joy Williams Joiner (David), and granddaughter, Kerianne. He is also survived by his brothers, Bill Williams (Kelli) and Mike Williams (Pam), and several nieces and nephews. Originally from Memphis, Tennessee, Bob was born on November 11, 1934. He graduated from Messick High School and went on to earn his Bachelor’s degree in Organ Performance from Memphis State University (University of Memphis). Sensing a call to ministry, he continued his education by earning a Masters in Sacred Music from The Southern Baptist Theological Seminary in Louisville, Kentucky. His first ministerial job out of seminary was as Minister of Music at First Baptist Church of Waycross, Georgia. It was here where he met his wife, Olivia, as they served together on the staff of First Baptist Church. Eventually, they moved to Newnan, Georgia where Bob served as the Minister of Music at Central Baptist Church until they surrendered to God’s call on their lives to foreign missions. On June 23, 1970 Bob and Olivia Williams were appointed as missionaries to Honduras through the Foreign Mission Board (International Mission Board) of the Southern Baptist Convention. Bob was appointed as the first Music Missionary to Honduras. Together they served in Honduras for almost 30 years. They saw God move in many wonderful and miraculous ways while serving on the field. In 1975 they walked the road of tragedy when they lost their son at the age of 5 in an accident during their first stateside assignment. A year later, they celebrated the birth of their daughter, Joy. Bob and Olivia fiercely loved the people of Honduras as well as their mission family. Serving the Lord in Honduras was the joy of their lives. After retiring from the field, they moved to Rome, Georgia where Bob continued to use his gifts serving in the local church playing the organ and piano for churches such as New Armuchee Baptist Church of Armuchee, Georgia and First Methodist Church of Calhoun, Georgia. In 2013, Bob and Olivia moved to Albany, Georgia to be near their children and granddaughter and joined Sherwood Baptist Church. In Albany, Bob continued to use his musical talents to play for First Baptist Church, Acre just outside of Albany. After losing Olivia, Bob moved to Monroe, Georgia with David and Joy and joined Prince Avenue Baptist Church in 2016. As was his desire, Bob found another church where he could use his talents and began playing the organ for First Baptist Church, Jefferson, Georgia. He would attend Wednesday evenings, and Sunday School at Prince Avenue and then drive to Jefferson to play the organ for their services each week. In the summer of 2019, God moved the family to First Baptist Church Indian Trail outside of Charlotte, North Carolina. Serving Jesus and others was the essence of Bob’s life. He lived his life constantly thinking about how to reach others with the good news of Jesus. This was never more evident than while in Athens, as a man in his 80’s, he would drive to the University of Georgia campus regularly to witness through an evangelistic program called “The Great Exchange” as well as spending time with international students who were learning to speak English. It was not uncommon for Bob to stop on the side of the road in a neighborhood and visit with a young family he happened to see while driving home. He so desperately wanted them to know Jesus and come to church that he would visit time and time again. He was known for his quick wit and sense of humor that engaged the people he met leaving them encouraged and with a smile on their face. His heart for service led him to serve at local nursing homes, Winshape Camps and Vacation Bible School each year well into his 80’s. Bob was a man of many talents. He was an avid artist with paintings and drawings hung throughout his home. He enjoyed holding an art exhibit one year at Floyd Medical Center where he sold a few of his paintings. Bob’s life was characterized by his service unto his Lord, his family, and the church. He used the talents given to him to bring honor and glory to his Savior. His life bore fruitful service until the end as he continued to build relationships with others during his final days on earth. He lived his life exemplifying the truth that relationships matter. The Family will be receiving friends on Saturday, October 19, 2019 at 1pm at Mt. Harmony Baptist Church in Mableton, Georgia. The Funeral will follow at 2pm in the sanctuary. The burial will take place at Mt. Harmony Memorial Gardens immediately following the service. Bob has requested that in lieu of flowers, donations be made to the Robert A. Williams III Memorial Trust Fund at the Georgia Baptist Convention. This Trust established by Bob and Olivia provides annual collegiate scholarships to missionary kids through the International Mission Board. You may make those donations by visiting www.gbfoundation.org/give. The account number to reference is 11215 and note in memory of Robert Williams Jr.

On Sunday, October 13, 2019, Robert (Bob) Alexander Williams Jr. went home to be with the Lord at the age of 84 in Charlotte, North Carolina. Bob was preceded in death by his parents Robert Alexander Williams Sr. and Mary Swift Williams, his... View Obituary & Service Information

The family of Robert "Bob" Williams, Jr. created this Life Tributes page to make it easy to share your memories.