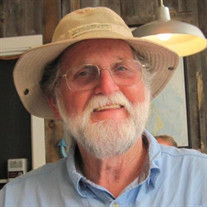 Mr. Rickey Maxey, a lifelong resident of the Gore community in Summerville, Georgia, died peacefully on July 10, 2020, following an extended illness. He was under hospice care for 8 months and was being cared for by his family at the home of his daughter & son-in-law in Kennesaw, Georgia. Rickey was preceded in death by his parents, Dewey Maxey, Sr. and Myrtle Maynor Maxey; siblings and their spouses: John Henry Maxey, Ophelia Maxey Brooks (Billy), Frances Maxey Holt (Tommy J.T.), Dewey Maxey, Jr., Annell Maxey Smith (Claude), Jerry Lee Maxey. He is survived by his wife of 42 years, June Wilson Maxey, daughter and son-in-law, Christa and Hisham Menkara, grandson Noah Menkara, granddaughter Sarah June Menkara, sister Cathryn (Leon) Pittman, brother Ralph (Doris) Maxey, sisters-in-law Mary Alice Maxey, Shirley Maxey. Special friends Judy and Bill Spurgeon, Barry Bramblett. Also surviving are many, many nieces and nephews. He is also survived by his beloved border collie, Bo Maxey. Rickey loved his family, his land, his friends, his dog and Trade Day (If it were a Tuesday or a Saturday, Trade Day was at the top of that list). He was a good husband and father. Generous. Funny. Strong. Hardworking. He was a great Papa, always ready to take a walk, go for a ride in the trail wagon, or share a snack and a tickle with the grandkids. Rickey was a man of varied interests and talents. Born the youngest of 9 children, he learned early on that there was little time for play. He had a gift for painting and drawing, but most often could be found working in a hay field or a chicken house. As an adult, he made his living as a machine fixer, but his passions were for the outdoors and for creating unique handcrafted furniture. He enjoyed working the soil and could not wait for gardening time to come each spring. During the winter months, he was often found in his wood shop, building his latest masterpiece. He returned to his love of art, later in life, and began drawing, painting, and creating mixed-media pieces, some of which attracted the eyes of art collectors. He and his wife built and opened a perennial nursery and an antique/art gallery. “The Lily Patch” is a legacy to his green thumb”; Maxey Folk Art” to his visionary ability to see art in everything. In 73 years, Rickey Maxey left a lasting mark on the community and on every person who crossed his path. He will be sorely missed. There will be no funeral for Rickey at this time. A memorial celebration of his life will be held at a later date when all his family and friends can safely gather.

Mr. Rickey Maxey, a lifelong resident of the Gore community in Summerville, Georgia, died peacefully on July 10, 2020, following an extended illness. He was under hospice care for 8 months and was being cared for by his family at the home of... View Obituary & Service Information

The family of Rickey Maxey created this Life Tributes page to make it easy to share your memories.

Mr. Rickey Maxey, a lifelong resident of the Gore community in...

Send flowers to the Maxey family.