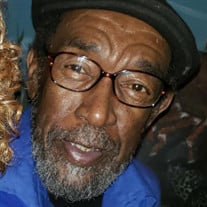 Reuben Lamar Adams was born on January 12, 1949 in Gadsden, AL to the late Katie Mae Adams – Coats and William Lafayette Adams. On Sunday morning October 11th Reuben Lamar Adams a devoted husband and loving father of eight, passed away at the age of 71. Reuben graduated from Carver High School and went on to Gadsden State College on a basketball scholarship where he played basketball and studied radio broadcasting. Reuben was skilled basketball player and could be seen in various newspaper articles in the Gadsden Times. While studying radio broadcasting he became the infamous “Super Wolf” and worked the late night radio shows at two radio stations in Gadsden and Anniston, Alabama. He later married Marcella (Staten) on July 4, 1982. Reuben and Marcella moved to Atlanta, GA in 1988 where he became a skilled builder and worked for two renowned home builders. During the 2008 economic crisis he was forced to stop building and became a custodian for the Cobb County school system. Reuben’s love for music led him to become co-owner of MG 2020, a DJ/media company created by his brother-in-law, Ben Staten where he was still able to “rock the mic” for local seniors and DJ/Emcee weddings, parties and other events. Reuben also volunteered for the North Metro Miracle League and the National Downs Syndrome Association after having a grandchild (Sylas) who was born with special needs. He later own created “Pop Pop the Clown” where he would entertain children and adults with special needs via the North Metro Miracle League adult and youth softball games in Alpharetta, GA. He was especially proud of being “Pop Pop the Clown” and it reminded him of how his mother cared for children with disabilities. Reuben was also the coach of his daughter Nailah’s girls basketball team (SAA) where they won the State Championship. He has always served his community with his talent and time. Reuben was especially proud of all of his children and was doting grandfather and great-grandfather. Reuben loved to travel with his family – cruising was his absolute favorite and he loved to spend weekends in the mountains with his wife Marcella. Reuben was preceded in death by his sister Kaye Walker, his brothers William Adams and Henry Lawrence Adams, three nephews Lafayette Adams, Derrick Adams, William (Junebug) Adams and two nieces Claudette Walker and Nicole (Nikki) Walker. Reuben is survived by his wife Marcella Adams and their two daughters - Jamila Jones (Christopher) and Nailah Adams. Reuben is also survived by his beautiful children – daughter; Shamekka Adams, and five sons - Rodney Samuels (Tabitha), Wade Suttle (LeSheka), DeShun Carlisle, Corey Carlisle and Ruberic Carlisle. He is also survived by his brother James Adams (Susie), his sisters-in-law Clera Adams (Henry Lawrence - deceased), Darine Jelks (Henry), Darlene Barkley and Mildred Adams, two brothers-in-law Ben CK Staten (Patricia – deceased), Henry Jelks (Darine), three nieces - Donna Adams, Shirley Adams and Michelle Malloy, a nephew - Darryl Adams and a host of nieces, nephews, grandchildren, great grandchildren and supportive friends. A memorial service will be held Saturday, October 17th, 3:00 PM at Davis-Struempf Funeral Home Chapel. The family will receive friends from 2:00 to 3:00 PM before the service. Following the service, there will be a brief repast with light refreshments due to COVID-19. Masks are required and must be worn throughout the ceremony. Seating will be socially distanced. For those wishing to view the service virtually, Mr. Adam’s memorial service will be livestreamed on Davis-Struempf’s Facebook at the above listed time.

The family of Reuben Lamar Adams created this Life Tributes page to make it easy to share your memories.

Send flowers to the Adams family.