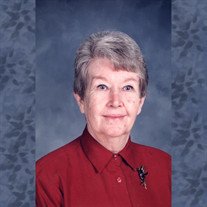 Paula Evelyn Ramsell Whiting, age 87, of Austell passed away December 6th, 2020. Paula was a long-time resident of Austell since 1961. She worked in both volunteer and part-time positions, including the afterschool program, at Clarkdale Elementary School for almost 20 years. Paula was born in Atlanta to Myrtle Evelyn Ramsell, of Norwegian descent, and Josh Ramsell, who was from England. She was orphaned at a young age and was partially raised by her dear Aunt and Uncle Moen in the College Park area of Atlanta. She graduated from Hapeville High School. During her early years, her family moved around a lot, so when she settled in Austell with the love of her life, Charles, she never wanted to move again! In addition to her deep love for her family, Paula also loved to collect. She was most interested in David Winter collectibles, lighthouses, and sunflowers. Paula was preceded in death by her parents, Josh and Evelyn Ramsell; and her Aunt and Uncle Moen. She is survived by her beloved husband of 59 years, Charles Daniel Whiting, Jr.; children, Dawn Simons (husband, Mark) of Dallas, and Damon Whiting (wife, Leigh Ann); grandchildren, Michael Simons and Ashley Simons; sisters-in-law, Gloria Palmer and Dianne Vandewater; brother-in-law, Markland Whiting; and a host of extended family and friends. Funeral services will be held Thursday, December 10th, 11:00 AM at Davis-Struempf Chapel. The family will receive friends from 10:00 AM to 11:00 AM before the service. A private interment service will be held Friday, December 11th, at Georgia National Cemetery. Anyone wishing to view the service virtually may do so via a livestream video that will appear on Paula’s tribute page at the beginning of service time. In keeping with current precautions due to COVID-19, we are requesting that anyone visiting wear a mask and maintains social distancing.

Paula Evelyn Ramsell Whiting, age 87, of Austell passed away December 6th, 2020. Paula was a long-time resident of Austell since 1961. She worked in both volunteer and part-time positions, including the afterschool program, at Clarkdale Elementary... View Obituary & Service Information

The family of Paula Evelyn Ramsell Whiting created this Life Tributes page to make it easy to share your memories.

Send flowers to the Whiting family.