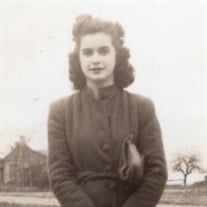 Myrl Tuggle Griffith Cato, age 97, of Winston, formerly of Austell, passed away February 27, 2022. Myrl was born to William and Susie Tuggle in Bowden, GA in 1924. She was a long-time resident of Douglas and Cobb Co, having graduated from Douglas County High School and lived a majority of her life in Austell. She had a jewelry store in downtown Austell, Griffith Jewelry, for many years until its closing after her late husband, Bill’s, passing. She also worked at Thomas Drugs for many years while it was under her son’s (Anthony’s) ownership. Myrl’s children and grandchildren were her world and she treasured their time spent together. She loved to cook for family gatherings and for her friends. Myrl was a beloved wife, mother, grandmother, great-grandmother, and friend whose sweet spirit will be dearly missed by all who knew her. Myrl is preceded in death by her first husband, Bill Griffith, daughter-in-law, Janie Griffith; and her six siblings. She is survived by her husband of 50 years, Roy F. Cato; children, Don Griffith, and Anthony Griffith (wife, Alicia); grandchildren, Tony Griffith (wife, Laurie), David Griffith (wife, Sara), Jonathan Griffith (wife, Amy), Leigh Ann Pittman (husband, Randy), and Stephen Brent Phillips (wife, Trichia); great-grandchildren, Hunter and Colton Phillips; Kaley DeJulianne, Megan Clackum; Evan, Nicholas, and Alex Katherine Griffith; Joshua, Rebekah, Hannah, and Matthew Griffith; Caia and Issac Griffith; and many beloved nieces, nephews, and extended family. A graveside service will be held Thursday, March 3, 12:00 PM at Rose Hill Cemetery with family officiating. The family will receive friends at Davis-Struempf Funeral Home from 10:00 to 11:30 AM before the service. In lieu of flowers, the family requests donations in Myrl’s name be made to St. Jude’s Children’s Research Hospital at www.stjude.org or Operation Heal Our Patriots at www.samaritanspurse.org

Myrl Tuggle Griffith Cato, age 97, of Winston, formerly of Austell, passed away February 27, 2022. Myrl was born to William and Susie Tuggle in Bowden, GA in 1924. She was a long-time resident of Douglas and Cobb Co, having graduated from Douglas... View Obituary & Service Information

The family of Myrl Tuggle Griffith Cato created this Life Tributes page to make it easy to share your memories.

Send flowers to the Cato family.