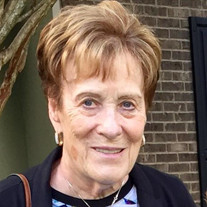 My mother Mireille Anne Marie Malatray Was born in Nancy, France on April 20th, 1934, her father was Jean Baptiste Victor Andre, born-1883 died-1974, and her mother was Berthe Kesslick, born-1893 died-1970. She has a twin sister, Anne Marie, who died at birth in 1934. Also, she had 3 brothers, Jean Claude, Jean Michelle, and Pierre Andre. She was a wonderful mother of 7 children, William Noel Jean Baptiste Cooper, Nancy Georgette Cooper, George Edward Cooper, Jr., Eric Ben Cooper, Scott Alan Cooper, Melinda Francis Cooper, and Patrick Wendell Cooper. All children have survived their mother. George Edward Cooper, born-1937 died-1984, was Mireille's first husband...he was a loving father. Mireille and George met while George was in France, then came to the United States on December 24th, 1957 and arrived in New York. George, Mireille, William, Nancy, and George Jr. settled in Chelsea, Massachusettes. When her son Eric was born in 1959, the family moved to Lakeview, North Carolina to live with the family of her husband, George Sr. The Lakeview home was wonderful, there are many fond memories of the family and friends there. Mireille was learning about America and learning to speak the English language, and loving her family and newfound home with all her heart. The family grew when Scott, Melinda, and Patrick were born to Mireille and George. Now there were 9 members of the family. The family lived in Martinsville, Virginia for a short while, then moved to Georgia, where Mireille took care of a large family. She was an amazing woman. She walked to a new job where she was an early 1963 Waffle House employee. Her picture is in every Waffle Hous...look for the beautiful girl pouring the coffee. She then worked at Grady Hospital for years, walking or taking the bus downtown. The family lived in several places in Dekalb County. Eventually, she divorced her first husband, George. Then she met the love of her life, Claude Jean Malatray. A finer husband, friend, and man has never lived. They were married until his death in 2007. Mireille was heartbroken, yet she held his memory close. Now she rests in Heaven, beside The Lord Almighty, her family, and husbands. No more suffering, no more pain. My mother, Mireille, died Tuesday, September 3rd, 2019 at 6:21 pm. It was then that the gates opened to take our mother, an angel, to heaven. She has countless friends, family, and co-workers who miss her and will never forget her. Her love and sacrifice will never be equaled or matched; she was the best mother ever. So we obey God's law to "honor thy father and mother". She is survived by 18 grandchildren and many more great-grandchildren. She is gone but not forgotten. Interment, Mt. Harmony Memorial Gardens.

The family of Mireille Anne Marie Malatray created this Life Tributes page to make it easy to share your memories.

Send flowers to the Malatray family.