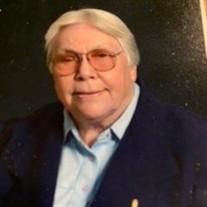 Mildred Allen Reeves, age 96, of Douglasville and formerly Mableton, passed away on November 7th, 2021. Mildred was the last of the fourth generation in Cobb County. She was born to Boyd and Bessie Argo Allen and was the 6th of 7 children. Mildred grew up in the Mt. Harmony area, where she attended Harmony School, Mableton School, and graduated from Austell High School in 1942. Mildred went on to obtain her higher education from Marsh Business College in 1943 and Georgia State University 1944-1946. After graduation, she began working at Southern Railway (now Norfolk Southern) in the Machine Accounting Bureau. She worked in this position from 1942 until 1961. During World War II, Mildred served the war effort by being a part of the Civil Air Patrol, where she served as a spotter for non-American planes. After she left her position at Southern Railway, Mildred was part-owner of Bankhead Lanes from 1961 to 1963, owned Harmony-House Cafeteria with her sister Hazel Cash from 1964 to 1973; and graduated from AREA Real Estate School and became a real estate agent with Freeman Realty Company from 1975 to 2005. She was also one of the organizers of Georgia State Bank in Mableton and served as a director from 1985 to 2004. Mildred is preceded in death by her parents; her son, Eddie Reeves; two sisters, Odessa Allen and Hazel Allen Cash; four brothers, Howard Allen, Pete Allen, Jack Allen, and Frank Allen; nephews, Charles “Buddy” Price and Allen “Doc” Cash; and niece, Jackie Brookshire. She is survived by her nieces, Penny Stanley, Nellie Meeks, Joan Knight, and Sandy Bell; and nephews, Larry Allen and Lamar Allen; and many great nieces and nephews, cousins, and friends. Funeral services will be held on Wednesday, November 10th, 2:00 PM at Davis-Struempf Chapel with Rev. Millie Kim officiating. Interment will follow the service at Mt. Harmony Memorial Gardens. The family will receive friends on Tuesday from 4:00 to 8:00 PM at the funeral home. In lieu of flowers, Mildred has requested that donations be made to Mt. Harmony Baptist Church, 561 Veterans Memorial Hwy SE, Mableton, GA 30126. For anyone wishing to view the service online, a live stream link will be available on Mildred's Tribute page at the above-listed service time.

Mildred Allen Reeves, age 96, of Douglasville and formerly Mableton, passed away on November 7th, 2021. Mildred was the last of the fourth generation in Cobb County. She was born to Boyd and Bessie Argo Allen and was the 6th of 7 children. Mildred... View Obituary & Service Information

The family of Mildred Allen Reeves created this Life Tributes page to make it easy to share your memories.

Send flowers to the Reeves family.