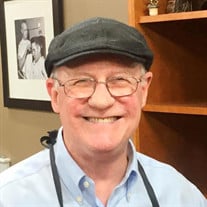 Michael Scott Sharp, age 74, beloved brother, uncle, cousin, and friend passed away unexpectedly on February 28, 2022. His death was the result of a severe brain injury from an earlier fall in his home in Mableton, GA. Mike was born on October 15,1947 in Nebraska City, Nebraska to Jean C. (Hollrith) Sharp and Ralph Donald Sharp. Mike was the second of three children. The Sharp family moved to Sheboygan, Wisconsin where he graduated from North High School in 1967. Soon after, he enlisted in the Army where he served two tours of duty in Vietnam and until his Honorable Discharge in the fall of 1970. Mike moved to the Atlanta area in 1972 where he became interested in the barber business and earned the Georgia Master Barber License. He worked for Dean Perkins at Deano’s Family Hair Center from 1978 until 2003 when Dean retired. Mike moved to American Haircuts in MidTown Atlanta sometime after that and was affiliated with them until his death. He truly loved his work and the people that he met. He made barbering both a science and an art form to which he added his trademark sense of humor. He was artistic, technically very proficient and professional, funny and friendly. He literally gave haircuts to 2-3 generations of the same families over the last 40 plus years of barbering and made life-long friends with his many customers. He loved to walk/hike, shoot pool, play cards, and have fun with family and friends. Mike was preceded in death by his parents and his “favorite, (and only)” brother-in-law, David Hitztaler. He is survived by his sister, Sherry Hitztaler of Highlands Ranch, CO; her daughters: Elizabeth Stone and family, Littleton, Colorado, and Stephanie Hitztaler and family, Syracuse, NY. He is also survived by his brother, Dave Sharp, sister-in-law, Julie Sharp, and their sons: Alex Sharp and Will Sharp, all of Madison, Wisconsin. Mike was a wonderful uncle to his nieces and nephews, great-nieces and great-nephews, and a special brother to his sister and brother. He will be truly missed and never forgotten. Donations may be made to WOUNDED WARRIOR PROJECT, (support.woundedwarriorproject.org), a favorite charity of Mike’s. Funeral Arrangements: SATURDAY, April 2 Davis-Struempf Funeral Home 1975 East-West Connector, Austell, GA 1:00-2:00 - Visitation 2:00 Service 3:00 Reception BURIAL: Thursday, March 31-12:30 PM Georgia National Cemetery 1080 Scott Hudgens Dr. Canton, GA

Michael Scott Sharp, age 74, beloved brother, uncle, cousin, and friend passed away unexpectedly on February 28, 2022. His death was the result of a severe brain injury from an earlier fall in his home in Mableton, GA. Mike was born on October... View Obituary & Service Information

The family of Michael Scott Sharp created this Life Tributes page to make it easy to share your memories.

Send flowers to the Sharp family.