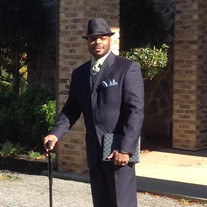 Luis Alphonse Lovell, 50, son of the late Sidney Alphonso Lovell and Carmen Maria Lovell was born on November 6, 1968. At the age of 14 he professed his faith in Jesus Christ. Luis attended St John’s College and would later graduate high school from Duke Ellington School of the Arts in 1986. Luis received vocal scholarships to both Catholic University and Howard University. He would spend a year at Howard University where he was introduced to "Black Excellence". He auditioned and joined the Howard University Gospel Choir, in Washington, DC. In 1988, Luis accompanied the Eastern High School Choir on tour to Vienna Austria, where they competed and won 2nd Place in a world-wide choral festival. He lent his beautiful tenor voice as a soloist on that tour. Luis became a member of Joshua's Temple Church in Washington, (Bishop Thson Rowe, Pastor) where he and his mother served. Luis served as a soloist and an Ordained Deacon before his elevation to Ministry. He joined the Metropolitan Police Department where he served as a patrolman and as a Sergeant at the 6th District. He exhibited great focus and commitment to building a career with the Police Department. He was able to realize the best opportunities for his family. He took great pride in sharing his gifts which enabled him to elevate to Desk Sergeant. He also served as a communicator and speech writer for his District. He retired from the police department after his cancer went into remission. During his time as a policeman Luis was an active member of his church, loyal to his ministries and extending his heart to his church family. He was a member of the Alfred A. Owens Chorale and a founding member of the Men’s Praise Team at Greater Mount Calvary Holy Church. He would graduate from Calvary Bible Institute. Luis moved to Atlanta, GA where true to his ministry and his faith, he became instrumental in the church’s leadership roles. He would soon find a beautiful life and church family at Grace Church International in Atlanta, GA (Bishop Johnathan E. Alvarado, Sr. Pastor & Dr Toni G. Alvarado, Co Pastor). He is survived by his son, Nicholas Lovell; devoted siblings Lena M. Lovell and Rafael Lovell; nephew, Joseph (Marisol) Lovell; niece, Alena Williamson; and great nephew, Elijah Lovell. Funeral Services will be held Saturday, October 26th, at Grace Church International with Bishop Johnathan Alvarado officiating. The family will receive friends on Friday from 5:00 to 8:00 PM at Davis-Struempf Funeral Home. Flowers are appreciated, or in lieu of flowers, the family requests donations in his name be made to Grace Church International, 3434 Pleasantdale Rd, Atlanta, GA 30340.

Luis Alphonse Lovell, 50, son of the late Sidney Alphonso Lovell and Carmen Maria Lovell was born on November 6, 1968. At the age of 14 he professed his faith in Jesus Christ. Luis attended St John&#8217;s College and would later graduate high... View Obituary & Service Information

The family of Luis Alphonse Lovell created this Life Tributes page to make it easy to share your memories.

Send flowers to the Lovell family.