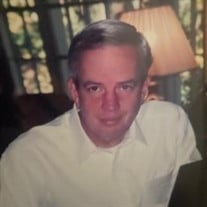 John Stephen Schneider Jr. (March 23, 1947 - April 27, 2021) It is with great sadness that the family of John Stephen Schneider Jr. announces his passing on Tuesday April 27, 2021 at the age of 74. He is survived by his wife of 47 years, Violette (Dreyfus), children John Schneider (Emily), Kristen Ralabate (Nicholas), Elizabeth Schneider, loving sister Mary Schneider, brother-in-laws Frank Dreyfus (Corrine, USAF Maj. Ret.) and Louis Dreyfus, sister-in-law Michelle Stafford (John), grandchildren Charlie, Jack, and Frank, and nieces, nephew, and cousins. John was a great man and to sum him up in a few words, he was kind, loving and never met a stranger. He was always a fun loving and outgoing person from his early days growing up in Smyrna and Atlanta, throughout school and into his fondly remembered alma mater NC State (Go Wolfpack). He was an active member of Delta Sigma Phi fraternity and would always tell stories about the fun times he had there, from picking up people for band parties such as Otis Redding, to charging for beers he put in the Coke machine. John’s spirit was always one that people wanted to be around. He was a great son, husband, dad and of course Papa John! While serving in the Air Force, John worked at the Pizza Inn in Goldsboro, NC where he first met Violette and was immediately drawn to her, making sure to get in good with her mom so that he could get that first date with her. They made a great life together here in Atlanta and had three wonderful children. John was a successful commercial real estate appraiser and worked for a number of great firms throughout his career, but his favorite job was that of Dad! He could always be seen with his camera, one of his other passions, from taking pictures of little John at Little League or bike racing to Kristen’s ballet recitals and volleyball matches and of course Elizabeth’s baseball and softball!! He would be the one that you would see when you got to the game out in the outfield taking pictures, even if the best view was from the bushes. He was also a loving grandfather to his grandsons Jack, Charlie and Frank. He was always there for the boys’ games and any occasion in between showing his love and support. He will be missed greatly, but we know he is in a better place and will be there in Heaven waiting for us when it’s time for us to make that journey home. In lieu of flowers, please send a donation to the Alzheimer Foundation of America in John’s name. Alzheimer’s Foundation of America 322 Eighth Avenue, 16th Floor New York, NY 10001 https://alzfdn.org/support-us/donate/

The family of John Stephen Schneider Jr. created this Life Tributes page to make it easy to share your memories.

Send flowers to the Schneider family.