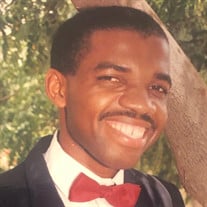 Jean Favelhomme Torsel, son of the late Eclara Torsel, was born on December 22, 1965, in Port-Salut, Haiti. He was raised in Port-Salut but spent some time in Jeremi, Haiti where he met his Loudy Cherie and fell in love. They were united in marriage on July 25, 1992, in Port-au-Prince, Haiti. Later, their union was beautified with three children. Jean was an active servant of Jehovah and a dedicated member of one of the Jehovah's Witnesses. He was baptized on August 30, 1986. While Jean was in Jeremi, he served as a special pioneer, showing his love for his father in heaven and for those around him by preaching the word of the truth. He was loved by so many, young and old. He was extremely jovial, sociable, vivacious, generous, kind, loving, loyal, comical, highly intelligent, and so full of life. He proved himself to be a good friend, considering those he loved as his family, and always strove to make those around him happy. Jean held so many talents and hobbies, deeply appreciating every aspect of life. He loved to sing, dance, play guitar, write astounding poetry, capture life with photography, and indulge in artistic creation. He took pleasure in learning and sharpening his mind with books and dictionaries, expanding his vocabulary and knowledge. He spoke four languages: Haitian Creole, French, English, and Spanish, but never was afraid of making mistakes. His greatest passion was the art of culinary, expressing beauty and intensity in every dish while fulfilling the appetite of those who were honored to taste and see his creations. When he settled in the United States, this passion led him to earn his culinary degree at New York Restaurant School, currently known as The Art Institute of New York City. He cooked devotedly for well-renowned places such as Ritz-Carlton Hotel, Hyatt Regency Atlanta, and Disney Vero Beach Resorts. He ran a catering business called Holalaa Catering Services, broadening his impact by cooking for weddings and events, assuring to bring people’s taste buds to life. Jean ran the race faithfully and steadfast, up until he laid to rest due to his battle with cancer. He passed away in his home on February 9, 2022, at the age of 56. He is survived by his wife, Lude Myard, his children, Kevin Edul, Amanda Marth, and Carsin Mayard, his adoptive daughter Myriam Anne Julie, his brothers Jusnold, Dieune, and many other siblings, cousins, nephews, nieces, uncles, aunts, and wonderful friends. Without a doubt, Favelhomme will remain in our minds, our memories, our hearts, and the taste of his food will remain on our palates.

Jean Favelhomme Torsel, son of the late Eclara Torsel, was born on December 22, 1965, in Port-Salut, Haiti. He was raised in Port-Salut but spent some time in Jeremi, Haiti where he met his Loudy Cherie and fell in love. They were united in... View Obituary & Service Information

The family of Jean Torsel created this Life Tributes page to make it easy to share your memories.

Send flowers to the Torsel family.