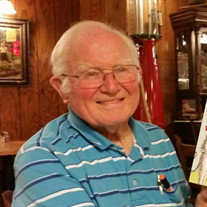 James T. Turley, age 92, of Lithia Springs passed away December 31, 2021. James was born to Pink and Zora Turley in Cobb County, but spent a majority of his younger years growing up in rural Austell. After he graduated from Austell High School in 1947, he served his country in the US Army Signal Corps and was honorably discharged in 1954. After his service, he began working full-time at Beck & Gregg while also attending school at Georgia State University, from which he graduated in 1960. After his graduation from Georgia State, he continued to work for Beck & Gregg, and then transitioned to working for Colonial Pipeline, where he started out as a Dispatcher and ended up being one of the first Computer Systems Programmers/Analysts in the company and in the industry. James retired from Colonial Pipeline after 30 years of service. James was enormously civically minded, and served his community in a number of capacities, including a volunteer fireman, member of the Civil Defense Corps, and a member of the Ruritan Club. He guarded and held sacred the right to vote which led him to work as a Georgia Elections Poll Manager. He was also an involved member of Lithia Springs United Methodist Church and an original member of the Lithia Springs High School Booster Club. As is apparent by this list of involvements, James was known for always being willing to help with anything. His accepting, supporting, and quiet nature was a warm and welcome addition to all his volunteer positions. While he was reserved and a man of few words, when he spoke, it was usually imbued with wisdom and understanding. In his free time, James enjoyed spending time outdoors and tinkering with his cars. Whether it was camping, boating, or water skiing, he found solace in nature and peace in spending time with his beloved family. James also had many dear friends he enjoyed spending time with, and the Tuesday morning breakfast at the Diner with the Men’s Group was the highlight of his week. His kind and generous heart also carried over to animals, and his precious cat, Sunny, had a special place in his life. James is preceded in death by his parents, Pink and Zora Turley; and siblings, Pink Turley, Jr., Ann Scroggins, Hubert Turley, and Felton Turley; and his infant twin brother, Gene Turley. He is survived by his beloved wife of 71 years, Thelma James Turley; daughter, Patricia Turley Smithline of Marietta; granddaughter, Melanie Nelson (husband, Mike) of Marietta; beloved niece, Catherine Rossi (husband, Dennis); and many beloved nieces, nephews, great-nieces and nephews, a great-great niece, and dear friends. A private family memorial service will be held at a later date. In lieu of flowers, memorials may be made in James’ name be made to the American Diabetes Association at https://www.diabetes.org/ or the Wellstar Foundation at https://www.wellstar.org/community/foundation.

James T. Turley, age 92, of Lithia Springs passed away December 31, 2021. James was born to Pink and Zora Turley in Cobb County, but spent a majority of his younger years growing up in rural Austell. After he graduated from Austell High School... View Obituary & Service Information

The family of James T. Turley created this Life Tributes page to make it easy to share your memories.

Send flowers to the Turley family.