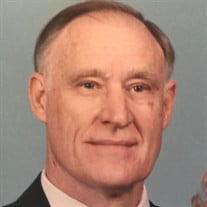 James Harris Hunter, 86, of Mableton, Georgia peacefully passed away on Wednesday, October 23, 2019 when he heard His loving Savior call his name. James was born in Rainsville, Alabama on December 30, 1932 to the late Alvin Gerchieu Hunter and Margaret Morgan Hunter. He is preceded in death by his beloved wife of 63 years, Barbara McCaslin Hunter. He is also preceded in death by his sister, Elizabeth Joyce King, and brothers, Roy Mac, David Gerald and Matthew. James graduated from Sylvania High School in 1951. After high school, he moved to Chattanooga where he apprenticed with Chattanooga Welding. He then went to work for a brief time at Redstone Arsenal in Huntsville, Alabama. James moved to Atlanta where he worked for Nabisco for the next 34 years until he retired. He married his sweetheart, Barbara Ann McCaslin, on November 19, 1955 at Chavies Baptist Church. He was a faithful member and deacon at Austell First Baptist Church for over 55 years. James is survived by his son, James Michael and his wife, Susan, Douglasville, Georgia and his daughter, Laura Suzanne and her husband, Stephen, Hoover, Alabama, four grandchildren, Steven Hunter and his wife, Cari, Smyrna, Georgia; Alyssa Scharf, Vestavia Hills, Alabama; and Ashley Scharf, Johnson City, Tennessee. He is survived by two brothers, Thomas A. Hunter, Rossville, Georgia and Clifton M. Hunter, Tampa, Florida. He is also survived by many nieces and nephews. The family will receive friends and family on Saturday, October 26 from 1-2:30 at Davis-Struempf Funeral Home—1975 East-West Connector, Austell, Georgia. Graveside service immediately following at Rose Hill Cemetery, Austell, Georgia. In lieu of flowers, donations may be made to the charity of your choice.

James Harris Hunter, 86, of Mableton, Georgia peacefully passed away on Wednesday, October 23, 2019 when he heard His loving Savior call his name. James was born in Rainsville, Alabama on December 30, 1932 to the late Alvin Gerchieu Hunter... View Obituary & Service Information

The family of James Harris Hunter created this Life Tributes page to make it easy to share your memories.

Send flowers to the Hunter family.