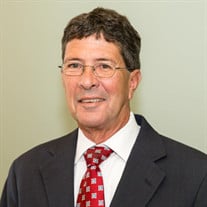 James “Jim” Burton Davis, age 64 of Austell passed away July 22, 2021. Jim was preceded in death by his parents, Roy and Mary Jim Davis; brother, Doug Davis. He attended South Cobb High School and then graduated from Arlington High School. Jim then graduated from Flagler College in St. Augustine, FL. He decided to follow in his father’s footsteps and graduated from John A Gupton College, Nashville, Tennessee in 1978. Jim worked side by side with his father, Roy Davis at Roy Davis Funeral Home for over a decade until his father’s passing in 1992. Jim and his sister, Debbie Struempf built Davis-Struempf Funeral Home in 1996. Jim has served families in and around the Austell community for many years. He served on the Georgia State Board of Funeral Service from November 3, 1998 until July 13, 2004. Jim loved to travel and has visited many different countries from Australia to Belize. He found his second home in Treasure Beach, Jamaica. He has contributed to the Treasure Beach community for over 20 years, donating computers for the local schools and offering support to the BREDS foundation. When Hurricane Ivan hit Jamaica in 2004, Jim got on the next flight out to help his friends clean up from the damage. He loved his Treasure Beach family. Jim enjoyed spending time with his daughters and grandchildren, Braves Baseball, Atlanta Falcons, working outside and his loyal dog, Gatling. He loved listening to music and especially live music. Jim has attended many concerts over the years. He is survived by his daughters, Lauren and Hannah; grandchildren, Raylee and Mason; sisters, Debbie and Kathi; nieces and nephews. Funeral Services will be held Tuesday 2:00 PM at Davis-Struempf Funeral Home Chapel with Rev. Ken Hennesy and Rev. Bill Rorie officiating. Interment will follow at Rose Hill Cemetery, Austell. The family will receive friends Monday from 3:00-8:00 PM at the funeral home. For those who are unable to attend the service in person, you may view the livestream of the service at the above listed time and a link will appear on Jim's tribute wall on Davis-Struempf Funeral Home’s website.

The family of James Burton Davis created this Life Tributes page to make it easy to share your memories.

Send flowers to the Davis family.