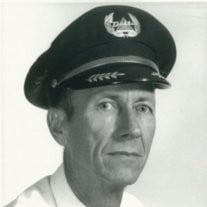 Jack L. Estes, 92, formerly of Vinings, passed away on May 5 in his residence at Presbyterian Village in Austell, following his beloved wife Tut who went before him in January of this year. Born on November 22, 1920, Jack grew up in Valdosta, Georgia as the youngest of five children of Mr. and Mrs. Iverson E. Estes. A U.S. Army Air Corps (Air Force) veteran, Jack served in the Air Signal Corps before becoming a Cadet (2nd Lt.) in WWII. During his pilot training he discovered his lifelong passion for flying. In 1946 Jack joined Delta Air Lines and rose to the rank of Captain, flying a variety of aircraft over the years. Jack relished his 34-year career as a pilot and retired only reluctantly at the mandatory age in 1980. At Delta he also met the love of his life and his wife of 60 years, Tut, to whom he was abidingly devoted until her recent death. Handsome, blond, trim and athletic, Jack was always moving. He and Tut traveled the world and were also active around their home on the Chattahoochee River, where they went on runs and sparred on the tennis courts in their Cochise neighborhood. Even in his 90’s, Jack continued his morning walks around the path at Presbyterian Village, rain or shine. Jack embodied integrity, loyalty, strength, and generosity. He was also adventurous and had a mischievous sense of humor. As a father, father-in-law and grandfather, Daddy/Granddaddy’s love and commitment to his family were strong, enduring and selfless, a reflection of Jack himself. Above all, Jack was a man of faith who knew how much he needed God. Jack and Tut were long-time members of Northside Methodist Church. He is deeply mourned by his family and friends, and all who loved and enjoyed him. Survivors include his daughter Leigh and husband Jeff Schlichting, and their two daughters, Nicole and Emma. A memorial service will be held Sunday, May 19, at 2:00 PM at Presbyterian Village (Lakeview Chapel), 2000 East-West Connector, Austell. Memorial donations may be made to East-West Ministries (to donate online go to https://www.eastwest.org/give/ and enter in memory of Jack Estes in the Special Instructions box) or to Northside Methodist Church, 2799 Northside Dr NW, Atlanta, GA 30305. www.davisstruempf.com

Jack L. Estes, 92, formerly of Vinings, passed away on May 5 in his residence at Presbyterian Village in Austell, following his beloved wife Tut who went before him in January of this year. Born on November 22, 1920, Jack grew up in Valdosta,... View Obituary & Service Information

The family of Jack L. Estes created this Life Tributes page to make it easy to share your memories.

Send flowers to the Estes family.