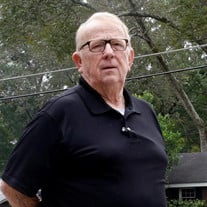 Howard Martin, born in 1942 in Atlanta, GA, passed away early Sunday morning, August 30th, at his home peacefully in Austell, GA. He attended O’Keefe High School in the late 50’s and later graduated from West Fulton High in 1960. He spent a very short stint in the US Air Force before working at Atlanta Gas Light Company, where he would retire after 30+ years of service. After retiring, he took up photography as a hobby that later turned into a second career. He would become track photographer for Dixie Motor Speedway in Woodstock, GA, and then moved on to be one of the track photographers at Atlanta Motor Speedway. He would also work with many of the up-and-coming drivers of all of NASCAR series held at AMS. He would volunteer his time and skills of photography for many charitable events - Captain Herb Emory Toys-for-Tots and playing Santa Clause at local Chic-fil-A restaurants were among his favorites. He had many passions in life, with most of them revolving around sports or photography. He was known in Smyrna, GA, where he lived for 50 years, as Coach Red by his players and their parents. He coached hundreds of kids for nearly 45 years in and around the Smyrna area in football, and his favorite, baseball. One of his greatest joys in life was hearing his grandson's name being called in the 10th round of the MLB draft and later getting to see him play in person in the minor leagues. His greatest pride in life was his Family. He is survived by his wife of more than 57 years, Sylvia Jean Skinner Martin; his two sons and their spouses, Gary and Joann, and Kevin and Nicolette, both of whom are graduates of GA Tech; one grandson and two granddaughters, Adam (Becca), Allison (Drew), and Madison; and five great-grand children; his sister, Carolyn Garmon and her husband, John; two sister-in-laws, Janet Johnson and husband, Johnny, and Sheila Crews and her husband Stan; and several nieces, nephews, great-nieces, great-nephews, and cousins. Funeral arrangements to be announced.

The family of Howard Clay Martin created this Life Tributes page to make it easy to share your memories.

Send flowers to the Martin family.