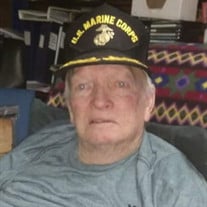 On February 18, 2021 at the age of 84, Harold Eugene Wood, Sr. of Powder Springs, Georgia passed away at home surrounded by his family. Harold was born in Byron, Georgia on December 14, 1936, as the second child of John Hubert Wood, Sr. and Martha Elizabeth Wood. He lived there until age 10. His family then moved to Milledgeville, and at age 18, he joined the United States Marines Corp where he served four years during the Vietnam War assigned to the 2D Topographic Company. In 1956, he married the love of his life, Alice Gertrude Smith, who he had known since he was a child. Harold and Alice moved to Powder Springs, Georgia in 1964, where he worked for Lockheed and then as an ironworker while supporting his growing family of five children. In the 70’s, he started a metal building business and then retired from the overhead crane business in 2004. He and Alice enjoyed traveling, having visited all 50 states with their last vacation being to Alaska. Harold was a long-time member of The Church of Jesus Christ of Latter-Day Saints (Lost Mountain Ward) and served as a High Priest. He was passionate about beekeeping, farming, woodworking and restoring antique vehicles. Harold was a devoted and loving husband, father (5), grandfather (15) and great-grandfather (25). He was a strong, kind, and selfless man who worked hard. Harold is survived by his wife of 64-years, Alice Gertrude Wood; his siblings Reginald “Reggie” Kay Wood of Florida, Lucille Elaine Scribner of Milledgeville, GA, Roy Warren Wood of Easley, SC, James Richard “Ricky” Wood of Milledgeville, GA; his children Debra Crowell (Thomas) of Woodinville, WA, Carol Tillman (Dennis) of Warner Robins, GA, Harold Wood, Jr. (Cathy) of Powder Springs, GA, Ronnie Wood (Connie) of Powder Springs, GA, Tammy Servos (Frank) of Edenton, NC; his fourteen grandchildren and twenty-five great-grandchildren. He was preceded in death by his parents; his siblings Hershel Lamar Wood, John Hubert Wood, Jr., Cecil Jerry Wood, Linda Lou Little; and his grandson Jacob Aaron Wood. Private viewing and services for immediate family only will be held on Monday, February 22, 2021 at 12 p.m. at Davis-Struempf Funeral Home in Austell, Georgia followed by a private graveside service at Kennesaw Memorial Park. Online viewing is available for others. In remembrance of Harold’s life, the family asks that charitable contributions to be made to the Alzheimer’s Association to support research on dementia.

On February 18, 2021 at the age of 84, Harold Eugene Wood, Sr. of Powder Springs, Georgia passed away at home surrounded by his family. Harold was born in Byron, Georgia on December 14, 1936, as the second child of John Hubert Wood, Sr. and... View Obituary & Service Information

The family of Harold Wood created this Life Tributes page to make it easy to share your memories.

Send flowers to the Wood family.