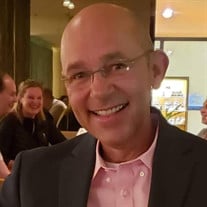 Gregory Lee Huffman, 59, of Smyrna, Georgia, passed away on June 23, 2021. He was born on April 17, 1962 in Beaufort, South Carolina to Helen Bennett-Sorrells. Greg attended Beaufort County schools for many years, but ultimately graduated from Logan High School in Logan, West Virginia in 1980. He went on to study Business for a brief span at the University of Southern West Virginia. Greg worked as an Electrician for 25 years before retiring to travel and focus on his health in 2020. Greg loved living life to the fullest and was a dear friend to many. He enjoyed playing Trivia at a variety of local venues, and could always be counted on to cheer you up if you were down. He was an avid fan of the Pittsburgh Steelers and Ohio State Buckeyes and could quote stats on any current or former player without hesitation. His closest friends affectionately called him “Huff” and one of his greatest joys in life was spending time with his best buddies. Gregory is survived by his beloved mother Helen Bennett-Sorrells of Beaufort, S.C., brothers Jesse “Buddy” Bennett III of Beaufort, S.C. and Larry Bennett of Powder Springs, Georgia, aunt Barbara Cooper of Beaufort, S.C., many much loved cousins, nieces and nephews. Greg also leaves behind “his brother from another mother” Keith Capps of Beaufort, S.C., his best friend and confidante since childhood. He was preceded in death by his maternal grandparents Golden and Bertha Huffman, aunts Bonnie “Sissy” Johnson, Patty Caudill and Uncle Golden “Peewee” Huffman Jr. The family has entrusted Davis-Struempf Funeral Home, 1975 East-West Connector, Austell, Georgia with the arrangements for his cremation. A private Celebration of Life is scheduled for July 10, 2021 from 1:00 to 5:00 PM at Amvets Post 70 located at 1831 Ribaut Road, Port Royal, S.C. Keith Capps will officiate the ceremony which will allow time for shared stories and tributes. Due to occupancy limitations and health concerns in these trying times, this event is limited to family and close friends.

Gregory Lee Huffman, 59, of Smyrna, Georgia, passed away on June 23, 2021. He was born on April 17, 1962 in Beaufort, South Carolina to Helen Bennett-Sorrells. Greg attended Beaufort County schools for many years, but ultimately graduated from... View Obituary & Service Information

The family of Gregory Lee Huffman created this Life Tributes page to make it easy to share your memories.

Gregory Lee Huffman, 59, of Smyrna, Georgia, passed away on June...

Send flowers to the Huffman family.