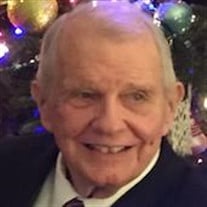 Mr. George Asnip Jr. of Presbyterian Village, Austell, GA passed away Tuesday, January 5, 2021 at WellStar-Cobb Hospital. Mr. Asnip was born January 6, 1929 in Philadelphia, PA to George Asnip, Sr. and Dorothy McQuade Asnip. He graduated Clemson University in 1950 before serving his country in the US Army. He worked for Wellman Advanced Materials, and Burlington Industries before becoming a manager for Celanese Corp.; he established its European division Amcelle, managed the largest textile mill in the world in Cumberland, MD, then became President of Millhaven Fibres Ltd in Canada. He retired from Celanese as Executive Vice President of Operations in 1975 to become Vice President of Finishing - Cone Mills; retired and became President of ABR Associates; retired and became the first Director of the Greensboro Business Center; retired and became the Director of GEHM; and finally retired to Pawleys Island where he was a consultant to Miss Ruby’s Kids. George loved God, his family, his church, and helping people. He was a kind Southern gentleman, tennis player, and fan of Clemson sports. Along with his parents, he was preceded in death by his wife of 60 years, Elizabeth, and his brother Bill. He is survived by children George (& Sylvia), Andrew (& Liz), Matthew (& Sally), and Elizabeth (& Rob); his grandchildren Britney, Elisabeth, Daniel, and Banks and Isabelle Ream; and a great-grandson Liam; as well as numerous nieces, nephews, and friends. All these will dearly miss his contagious humor, his delighted wit, his insatiable intelligence, his amazing memory, and his zest for life. The family requests that in lieu of flowers, donations be made to Miss Ruby’s Kids, P O Box 1007 Georgetown, SC 29442; or, https://www.missrubyskids.net/donate; or, 1-843-436-7200; Presbyterian Village will be holding a virtual memorial on January 24th at 2:00 pm; Zoom viewing is available, please use the Meeting ID: 831 8342 7964, please call Davis-Struempf Funeral Home at 770-944-2900 for the passcode. An interment service is planned at Holy Cross Faith Memorial Episcopal Church, 113 Baskerville Drive, Pawleys Island, SC, 29585 for Saturday, April 10th.

The family of George Asnip Jr created this Life Tributes page to make it easy to share your memories.

Send flowers to the Asnip family.