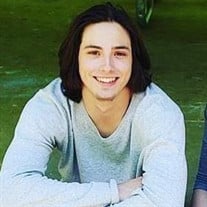 Gavin Reese Oliver was born at Northside Hospital on May 25, 2000, and passed away June 21, 2019. He was the youngest of three siblings. He was a graduate of Sprayberry High School, Class of 2018. After graduating, he immediately joined the Sheet Metal Workers Local Union No. 85, where he worked as an apprentice for BHW. Gavin had a tenacity for life and love for the outdoors, including fishing with his brother, skateboarding, and airsoft with his team SYNC, which won competitions and sponsorships. His biggest love since the age of 4 was always motorcycles. Most recently, he joined a new brothership, Georgia Supermotos (GASN). Lest we forget his football journey, Gavin was a great athlete. He started playing at the age of 5 with the Blackwater Bears. Later, he played with the Sequoyah Chiefs as well as Sprayberry High, who went on to win the state championship in their division. However, nothing compared to his love for the Georgia Bulldogs. He spent many nights with his father learning how to work on cars and motorcycles. His dad was his biggest hero. He was such a loving son, brother, cousin, grandson and friend. What was most endearing was his role as an uncle to his four nieces and nephews. He loved unconditionally and had many friends. His two best friends throughout his life were Chancey Connor, and his four-legged friend, Daisy Oliver. Gavin is survived by his parents, Stacey and Guy Oliver; grandmother, Dixie Shreiner; grandfather, Gil Oliver; grandparents, Linda Jeffares (Jerry); siblings, Jamen Costner (Tori) and Mackenzie Costner (Andrew Collins); soul-brother and best friend since Kindergarten, Chancey Connor; nieces and nephews, Cadence, Jaxon, Maddux, and Ellie Mae; cousins, Abbi Bray and Zack Rhodes; and beloved dog, Daisy Oliver. Funeral services will be held Tuesday, June 25, 4:00 PM at Davis-Struempf Funeral Home Chapel with Mark Ellerbee officiating. The family will receive friends from 1:00 to 4:00 PM before the service. Flowers are accepted, however in lieu of flowers, the family requests donations be made to St. Jude’s Children Hospital.

Gavin Reese Oliver was born at Northside Hospital on May 25, 2000, and passed away June 21, 2019. He was the youngest of three siblings. He was a graduate of Sprayberry High School, Class of 2018. After graduating, he immediately joined the... View Obituary & Service Information

The family of Gavin Reese Oliver created this Life Tributes page to make it easy to share your memories.

Gavin Reese Oliver was born at Northside Hospital on May 25,...

Send flowers to the Oliver family.