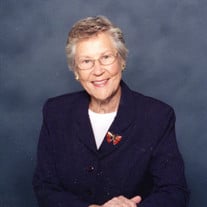 Dorothy “Dot” Jenkins Lowry, age 90, of Austell passed away December 7, 2020. Dot was affectionately known as “Mama Dot” to her children and grandchildren. She was a long-time member of Calvary Baptist Church in Austell. Dot was born in Columbus in 1930 to Henry and Bonnie Jenkins. Her father passed when she was very young, and she was raised by her mother and loving step-father, William H. Smith. Dot graduated high school from Mountain Hill School, where she played on the tennis team. During her youth, she was also an avid swimmer. Dot married at the age of 18 and moved to Athens with her husband, J.T. She and J.T. lived in multiple cities around the Southeast including Decatur and Birmingham, as they moved for J.T.’s job. Dot worked as homemaker and loving mother to her four children, and eventually went to work with her husband at L.B. Price and Alabama Novelty. She went on to retire from Southern Bell after 20 years of service. Dot’s motto was “God first, others second, and self last”. She lived by that phrase her entire life. Dot loved her church and enjoyed teaching Sunday School. She was a faith-filled woman who loved her Lord. Dot was preceded in death by her husband, James Towers Lowry; and brother, William David Jenkins. She is survived by her children, Susan Lowry of Powder Springs, Nancy Bolton (husband, Ken) of Hamilton, David Lowry (wife, Naomi) of Powder Springs, and Judy Lowry of Dallas; grandchildren, Bonnie Newman, Stacy Bolton, Kristy Bolton Moede (husband, Michael), Jacob Lowry (wife, Heather), Jonathan Lowry (wife, Jessica), and Kaitlyn Lowry; great-grandchildren, Henry “Hank” Bolton, Rooney Lowry, and Greyson Lowry; and brother, Wimberly Smith. A memorial service will be held Saturday, May 8th, 11:00 AM at Mountain Hill Baptist Church in Hamilton, GA with Rev. Bill Rorie officiating.

The family of Dorothy "Dot" Lowry created this Life Tributes page to make it easy to share your memories.

Send flowers to the Lowry family.