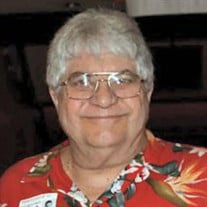 David Edwin Nance, age 77, of Lithia Springs passed away January 31, 2021. David proudly served his country for two years in the United States Air Force. He completed basic training at Coco Beach and was then stationed in Juno, AK. David was very involved in his community. He was a member and past Master of the Masonic Lodge #523, member and past Commander of AM Vets Post 118, and a member and past President of Sweetwater Shrine Club. He was also a member of The Yaarab Temple in Atlanta. In David’s free time, he enjoyed golfing, spending time at his lake home in Wedowee, and riding his motorcycle. He was an avid music-lover and enjoyed DJ-ing at Post 118 and past high school reunions. David had begun to write a memoir of his life called “The Life and Times”, and had made it up to 2017. But most of all, he treasured time with his family. David is preceded in death by his parents, James and Francis Nance; sister and brother-in-law, Mary Alice and Rufus Bateman; and brother, James Nance. He is survived by his loving wife of 35 years, Pamela Countryman Nance; children, Kimberley Nance Misenheimer of Concord, NC, Brian Edward (Jasmine) Lawson of Atlanta, Michael Allen (DeAnna) Nance of Pooler, and Allison Nichole (Ricky) Nance Jeffcoat of Pembroke; grandchildren, Samuel, Ella Grace, Dylan, Kira, Ava, and Ricky Dale; and many beloved family and friends that loved him dearly. Funeral services will be held Wednesday, February 3rd, 4:00 PM at Davis-Struempf Chapel with Rev. Ken Hennesy and J.D. Mitchell officiating. The family will receive friends from 2:00 to 4:00 PM before the service. In lieu of flowers, the family requests donations in David’s name be made to the Sweetwater Shrine Club, 3611 Riley Rd, Douglasville, GA 30134, which will go to the Shriner’s Children’s Hospital Anyone wishing to view the service virtually may do so via a livestream video that will appear on Mr. Nance’s page during the listed service time. In keeping with current precautions due to COVID-19, we are requesting that anyone visiting wear a mask and maintain social distancing.

The family of David Edwin Nance created this Life Tributes page to make it easy to share your memories.

Send flowers to the Nance family.