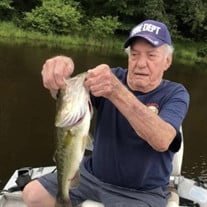 The Great One arrived on earth July 5, 1938 - His name, CL Crider CL Crider, age 83 of Powder Springs, Ga, passed away 09/07/2021. He is a navy Vet and retired Atlanta Fireman. He wore many hats during his life in addition to being a Vet and Fireman – Construction Entrepreneur, Inventor, Lounge Owner, and many more endeavors. CL was preceded in death by his Father James Crider, Mother Myrtle Tubbs, Sister Mauldine Hayden, and Brothers Leroy & Verlon Crider. CL is survived by his wife of 43 years, Barbara Crider, Ex-Wife Carol Biddy, Son Cliff Crider, Daughter & Son-in-law Lynn & Charles Britt, Daughter and LOVE OF HIS LIFE Hayven Bishop, Step-Son and daughter-in-law Jimmy & Judy Palmer, Step-Son Greg Palmer, 7 Grandkids - Grandson & Daughter-in-law Eric & Barbara Crider, Granddaughter & Son-in-law Amanda & Thomas Hembree, Grandson & Daughter-in-law Chad & Cady Crider, Granddaughter Shay Crider, Granddaughter Kayla Crider and Grandson & Daughter-in-law Casey & Brianna Crider, Sister Shirley Bricklemyer, Brother James Tubmlin and Sister & Brother-in-law Irene & Phil Gossett. 14 Great-grandchildren and many nephews and nieces. If you ever had the pleasure of meeting CL – you would never forget him. He made an impression on you. He was always looking for the next big deal that was going to make him a millionaire. He could draw you in talking about all of his inventions or some other story, He always had a story to tell. He always had something to talk about. He is going to be greatly missed. These were taken from Facebook posts by grandkids. They sum up my Dad, CL, pretty good. Eric Crider Let me tell you about the person we just lost. 1. He would help anyone, even those that others would argue didn’t deserve it. 2. He could brighten the room no matter the situation, he never did stop joking; which leads me to… 3. You absolutely never knew of what he just told you was true, but he made you believe it was. 4. Veteran. He served in the Navy and during his FOUR years had to repeat boot camp (see #3). 5. Retired Atlanta firefighter where he served 20 years and lost his brother to a fire. He would never turn you away and enjoyed the company. Please, stay safe from this virus, but take time and reach out to your loved ones. Everyone wishes they had more time, but once it’s gone, you can never get it back. 6. He was a pitcher for the Reds, but only played in their minor league. 7. This dude could trade anything and always traded up. He traded something worth close to nothing, and ended up with a $40k RV that he sold. 8. This dude ended up building some of the Midas muffler shops. I actually helped him build the Stone Mountain location. 9. He helped Emmry(businessman and friend) buy and service many oil stations in Texas. 10. He and Barbara Prance Crider have been raising a wonderful young girl for at least the past 10 years. It looked like people were having fun with the first ones and the last thing he would want were people crying and sobbing over him. I love you and will miss you more than you know old man. Shay Crider Time….We spend our entire lives searching for it but when it’s gone we wonder where it went or how it slipped away from us. We always think we have more time, but we don’t. We never do. And life has a very unpredictable way of reminding us of this lesson every once in a while. Today my family lost a dad, a paw paw, a great-grandparent, an uncle, a friend. Today will forever be a moment in time that changed our worlds forever. We lost one of the greatest men to have ever walked this planet. He loved his family. He was true, honest (sort of, if you know, you know) and would do anything for anyone. He was selfless, always thought of everyone else and would often just drop off random things that he picked up somewhere that he thought you may need. He always had a story to tell, whether it was true or not didn’t matter. He was always making people laugh, damn that man was funny! I can’t think of one time I was ever mad at him. He was special. And he was loved. But most of all, he always found the time for his family. He was always there. And now that it is time to say goodbye to my precious Paw Paw, I encourage all of you to pick the phone up and call someone you love. Just make the time. Because one day, you’re not going to be able to and that reality hits like a ton of bricks. Life truly changes in the blink of an eye. Please just wrap your loving thoughts across my family’s hearts right now as we reflect the life of a man who is loved dearly and missed deeply. This is a huge loss for us

The Great One arrived on earth July 5, 1938 - His name, CL Crider CL Crider, age 83 of Powder Springs, Ga, passed away 09/07/2021. He is a navy Vet and retired Atlanta Fireman. He wore many hats during his life in addition to being a Vet... View Obituary & Service Information

The family of CL Crider created this Life Tributes page to make it easy to share your memories.

Send flowers to the Crider family.