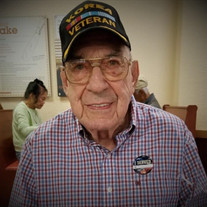 Charles (Slick) Glenn Underwood, Sr., was born in Mt Vernon, Indiana on November 1, 1931. He passed away on Wednesday, April 28, 2021. A worker all his life, Charles started working in the fields as a farm hand at the age of 6, drove his first truck at 7. A Korean War combat veteran, Charles spent two years on the front lines in North Korea. Upon returning home, he married his wife, Marilyn Jo Clevenger, and started his truck driving career hauling groceries for Kroger. Subsequently, he spent the next 60 plus years hauling livestock, house trailers, and glass across much of the U.S. He fully retired from trucking at the age of 80. He also worked part-time at various jobs as a carpenter, painter, pigeon removal service, and promotional item salesman, among others. In his younger years he enjoyed hunting and fishing with his dad and friends. A born-again Christian, he was a member of several churches over his lifetime including Calvary Baptist Church (Vincennes, IN), Friendship Baptist Church (Mableton, GA), and Harvest Baptist Church, (Fleming Island, FL). He is survived by his Son, Charles Underwood Jr., daughter, Rhonda Smith both of Green Cove Springs, FL, Sister-In-Law, Martha McBride of Evansville, Indiana along with several nieces and nephews. He is preceded in death by his wife of 45 years, Marilyn Jo (Clevenger) Underwood, daughter, Sandra Lea Underwood, son-in-law, Stephen Michael Smith, grandson, Alex Michael Underwood, his parents, Fredrick W. and Cecilia Vaughn Underwood. Siblings, Robert and Douglas Underwood, Madelyn Cox, Hazel Valine and Freida Willey Fulfilling his last wishes, Charles’ ashes are being interned alongside his wife at Mt. Harmony Cemetery in Austell, GA . Graveside services will be held on Saturday, May 22, 2021 at 10AM. In Lieu of Flowers, please consider donating to a local Hospice or your local church in his memory.

Charles (Slick) Glenn Underwood, Sr., was born in Mt Vernon, Indiana on November 1, 1931. He passed away on Wednesday, April 28, 2021. A worker all his life, Charles started working in the fields as a farm hand at the age of 6, drove his first... View Obituary & Service Information

The family of Charles Glenn Underwood Sr. created this Life Tributes page to make it easy to share your memories.

Send flowers to the Underwood family.