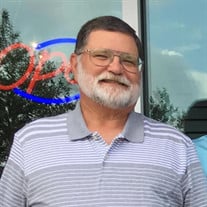 Charles “Eddie” Sexton, of Douglasville, GA passed away October 29 at the age of 69. He was known for his love of Jesus, family, and classic cars. Eddie was born September 28, 1951 in Austell to William Carl and Nellie (Hitchcock) Sexton. He attended Davis Chapel Baptist Church and graduated from South Cobb HS in 1969 and Southern Tech in 1972. He married Martha Taylor on November 24, 1972. Eddie retired from Lucent Technologies in 2004 and drove a school bus for Paulding County afterwards. Eddie was a man of deep faith in Jesus, very active in New Georgia Baptist Church in Villa Rica, continuing to visit shut-ins and singing in the choir. He always had a heart for missions. He started each day with Bible reading at the kitchen table, building a faith he passed on to his children. In his spare time he enjoyed Hallmark Christmas movies and working in the yard, but loved to get away to the mountains with Martha every chance he got. He is survived by his wife and his siblings: Wanda (Jerry) Stephens of Winston, Pat (Charles) Douglas of Alma, Linda (Steve) Hampton of Douglasville, and Rickey (Vickie) Sexton of Marietta; his children: Chad (Shanna) of Blackshear, Kurt (Crystal) of Maryville, TN, and Keri Johnston of Powder Springs; nine grandchildren: Grant, Colin, Rowan, Evan, Andrew, Taylor, Riley, Colton, and Nora, as well as many nephews, nieces and their children and grandchildren. He was preceded in death by his parents, step-father Oliver Allen, and son-in-law Scott Johnston. In lieu of flowers, the family requests donations be made to the International Mission Board at either IMB.org/give or sent to New Georgia Baptist.

Charles &#8220;Eddie&#8221; Sexton, of Douglasville, GA passed away October 29 at the age of 69. He was known for his love of Jesus, family, and classic cars. Eddie was born September 28, 1951 in Austell to William Carl and Nellie (Hitchcock)... View Obituary & Service Information

The family of Charles "Eddie" Sexton created this Life Tributes page to make it easy to share your memories.

Send flowers to the Sexton family.