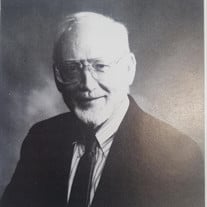 Carl Allen Bramlette, Jr. died peacefully at Presbyterian Village in Austell GA, Saturday, June 5, 2021, at the age of 95. He was preceded in death by his beloved wife of 71 years, Anne Wallace Hicks Bramlette, and his elder sister Ina Bramlette Tuohey Stone. Dr. Bramlette grew up in Laurens, South Carolina, the only son of Elizabeth Holcombe Bramlette and Carl Allen Bramlette, Sr. His first job was on the shop floor of the Laurens Cotton Mill and he was organist at the First Presbyterian Church. He enlisted in the Navy at age 16, completed Officer Candidate School and served on Ulithi until the end of WWII. He and his wife, then known as Wally, were married in Laurens SC, June 10, 1949, and honeymooned at Grove Park Inn in Asheville NC. They began married life in Richmond VA, later moved to Columbia SC and in 1964 finally settled in the Atlanta area. In 1948 he graduated with Honors from Presbyterian College in Chemistry, and in 1953 he was awarded a Doctorate of Philosophy in Clinical Psychology from Duke University. Following a post-doctoral internship at the South Carolina State Hospital for the Insane in Columbia SC, he joined the South Carolina Mental Health Association, where he helped design the first state-wide community mental health system. In 1964 Dr. Bramlette began his management consulting career with the firm of Rohrer, Hibler and Replogle, then with the Southern Regional Education Board. In 1969 he became a Professor of Management at Georgia State University, where he taught Masters and Doctoral candidates in organizational design, interpersonal dynamics and systems theory. He directed the Franklin Foundation Lecture series and supervised the publication of its journals. When he retired as an Emeritus Professor in 1988, a scholarship for scholastic achievement was established in his name. Dr. Bramlette combined teaching with private consulting in the United States and Canada for The Mescon Group; working with executive boards and line staff at large industrial and engineering firms to implement collaborative partnerships between labor and management. He spoke often of encouraging his students and clients to “make a just noticeable difference” in the world. Carl and Wally were founding members and Elders at Providence Presbyterian Church in Chamblee GA where Carl served as its first organist and choir director. Later they joined the First Presbyterian Church of Atlanta, following a move into a home they designed and built in Ansley Park. There he and (now) Anne established the Stephens Ministry, a program to train lay ministers in counseling and support services. They remained stewards and mentors of the Ministry for many years. Carl and Anne also designed and built a second home at Big Canoe GA for family re-creation and spiritual retreats with longstanding friends. In retirement, Carl read widely in philosophy, history, economics, religion and quantum physics. A lifelong Progressive Democratic, he feared unconstrained capitalism, and was an articulate advocate for social and economic justice. He was an accomplished pianist; when he could no longer play to his own standards, he donated his Steinway baby grand piano to Presbyterian Village. After he and Anne retired to Presbyterian Village, he became a painter and many of his works hang in the breezeways there. At the time of his death, he was participating in a group study of Jungian dream analysis. Dr. Bramlette was an honorable man, generous and kind. He lived fully until he died; with wisdom, laughter, music and poetry, a deep commitment to the concerns of others; and a light-hearted joy in the company of his family and his certain knowledge of reunion with Anne. Our parents will always be with us in spirit. We are their survivors: four children, six grandchildren and two great-grandsons; Anne Bramlette, Caran Bramlette, Carla Bramlette, (Linda Jackson), Jim Bramlette, Fariah Hassan (Muhammed Noor), Allen W. Graham (Lance Elias), Charlie Hayden (Conor Hayden), Jessie Bryant, Clay Bryant, Ashley Wingo, Josef Bate and Ayden Wingo. A memorial service at Presbyterian Village in Austell GA will be held on Saturday, July 24 11AM at the Village Center, 2000 East-West Connector, Austell GA 30106. Covid protocols are in place. Temperatures will be taken and unvaccinated visitors are asked to wear masks. Thank you.

Carl Allen Bramlette, Jr. died peacefully at Presbyterian Village in Austell GA, Saturday, June 5, 2021, at the age of 95. He was preceded in death by his beloved wife of 71 years, Anne Wallace Hicks Bramlette, and his elder sister Ina Bramlette... View Obituary & Service Information

The family of Carl Allen Bramlette Jr. created this Life Tributes page to make it easy to share your memories.

Send flowers to the Bramlette family.