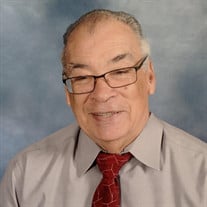 Benito Caraballo, Sr., was born in Guayanilla, Puerto Rico in October 1943. As a “middle child” in a family of 10 brothers and sisters, he grew up surrounded by the love, energy, and mischief that such a group could provide. After spending his childhood between Macaná, Puerto Rico and New York City, he enlisted in the U.S. Navy at the age of 17, and performed sea service in support of the U.S. naval quarantine of Cuba during the Cuban Missile Crisis. After completing his military service, he married Rudesinda in December 1964 and settled in New York City where both of their sons, Ben, Jr. and Felix were born. Understanding the importance of training and education, he began his college studies while working full time and helping raise his family, eventually earning his Bachelor of Science degree from the City University of New York and a Masters of Science degree in Energy Management from the New York Institute of Technology. At the same time he remained active with his sons in Boy Scouting, serving as an Assistant Scoutmaster of his sons’ troop. After nearly 40 years working in power generation and facilities management for Consolidated Edison, the State University of New York - Old Westbury, and the New York City Board of Education, he relocated to the Atlanta area as the Director of Campus Facilities for the Westminster Schools, a position he held until he retired in 2005. Benito enjoyed spending time with his family here in Atlanta and across the United States, as well as travelling with Rudesinda on many fun-filled cruises and road trips. He was a parishioner and usher at St. John Vianney Catholc Church in Lithia Springs. Benito passed away December 17th, 2020. He was preceded in death by his parents, Felix, Sr. and Herminia, as well as two of his sisters, Auria and Herminia. He is survived by his wife, Rudesinda; his son Benito, Jr. and daughter-in-law Joanne; his son Felix and daughter-in-law Anne Marie; his grandchildren Rachel, Alex, and Benito, III; brothers Felix, Jr. and Orlando; sisters Elia, Mercedes, Guadalupe, Sophia, and Yolanda; and many beloved nieces and nephews. Funeral services at St. John Vianney Catholic Church and interment at Georgia National Cemetery will be scheduled at a later date to ensure the safe participation of Benito’s many loving friends and family members.

Benito Caraballo, Sr., was born in Guayanilla, Puerto Rico in October 1943. As a &#8220;middle child&#8221; in a family of 10 brothers and sisters, he grew up surrounded by the love, energy, and mischief that such a group could provide. After... View Obituary & Service Information

The family of Benito Caraballo Sr. created this Life Tributes page to make it easy to share your memories.

Benito Caraballo, Sr., was born in Guayanilla, Puerto Rico in...