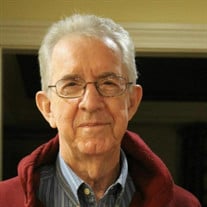 Retired Chief Master Sgt. Barry Broadway, 85, of Powder Springs, passed away peacefully on May 10 with his family at his side. Born in Rome, Georgia, he was the son of Bunk and Irene Broadway. He attended Rome High School until he’d had enough, and at 17 he joined the U.S. Air Force with his best friend, Chuck McGinnis. For most of his career, he was stationed at Dobbins AFB in Marietta, which led to him moving the family to Powder Springs in 1976 to spend less time on Kingston Highway and more time at home. He traveled the world with the US Air Force and the Georgia Air National Guard and after 36 years of serving his country proudly, receiving numerous recognitions and commendations, and literally moving up the ranks, he retired to a life of gardening and relic hunting. His gardens were stunning and always led to a couple of weeks of canning too many tomatoes, and the okra was worth its weight in gold. The treasures he found were no less valuable than the friendships he had with his ‘nerding’ buddies He was a devoted husband and father, generous in every way. He was a scout leader, a coach, a “band parent,” and an outstanding grandfather. He loved coffee, cooked some kicking spaghetti, and no one on this earth made cornbread better than him. He is preceded in death by his parents, and his brothers, Bobby Broadway and Charles Broadway. He is survived by his devoted wife of 63 years, Tina; his daughter and son-in-law Dana and Danny Willis; his son and daughter-in-law Tim and Sarah Broadway, his granddaughters Anna Willis Hudson and Erin Willis, and his grandson Noah Broadway; his sister Barbara Broadway Henderson; new-found Broadway, Sherry Battle and her family; and his brother from another mother Don Henderson. The family will receive friends for visitation Tuesday from 11:00-12:45 PM at Davis-Struempf Funeral Home. Interment will follow at Georgia National Cemetery, Canton at 2:00 PM. In lieu of flowers, the family requests donations be made to the Leukemia & Lymphoma Society and the Honor Flight Network.

Retired Chief Master Sgt. Barry Broadway, 85, of Powder Springs, passed away peacefully on May 10 with his family at his side. Born in Rome, Georgia, he was the son of Bunk and Irene Broadway. He attended Rome High School until he&#8217;d... View Obituary & Service Information

The family of Barry Broadway created this Life Tributes page to make it easy to share your memories.

Send flowers to the Broadway family.